The tree comes down today 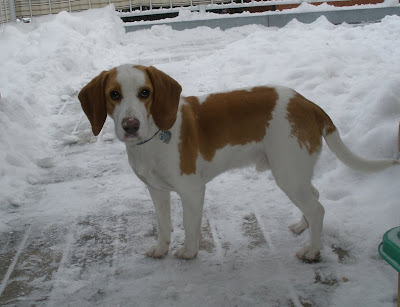 It hasn't been as cold the last few days and Georgie just loves playing out in the snow. He loves to bite it, burrow in it, fling his chew toys about and frolic. I finally got a clear pic of him which is difficult since he never stops moving. 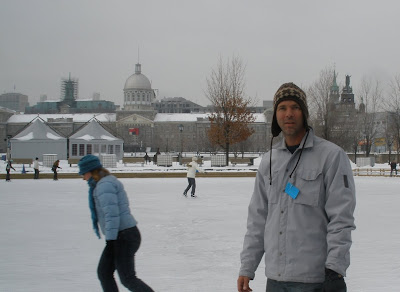 On Christmas Eve, we went ice skating at the old port as is tradition. Last time we didn't even skate, we just looked on, so this time I insisted on actually skating. I put a video up of it on Facebook, maybe this link will work. While Serge was filming, a security guy came up to him and demanded to see his proof of payment (that blue badge in the pic) which was in his pocket. We didn't pay though. Some customers were leaving and gave us theirs. We did the same when we left. They should probably use some other method, like stamping hands or something. 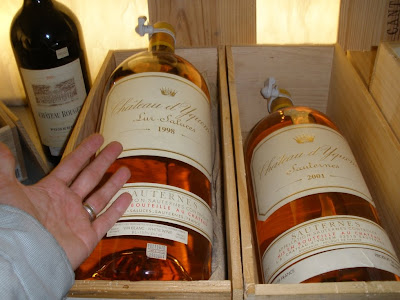 After skating, we went to see the Bodies exposition. They were all surly about taking pictures there, but another blogger was more successful and has a few posted over here. It was pretty interesting, but a little steep at $25. After that, we were near the high end liquor store and walked through. What a madhouse on Christmas eve! Anyway, there were these bigger-than-magnums of Chateau d'Yquem sauternes for thousands of dollars. Ah to be wealthy. 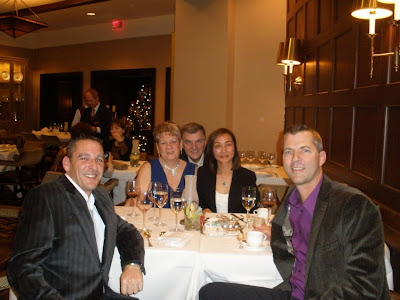 On Christmas day, we pretended to be rich and had brunch at the Beaver Club here at the Queen Elizabeth hotel. (You know, the place John and Yoko had their bed-in.) It was pretty swanky but my skin crawled a little at the snobby blue haired crowd and the way they spoke to the staff. It reminded me so much of my Ritz Carlton days, and I knew again that I will never be able to play the subservient, "Of course madam, may I lick your ass as well," role that such an establishment requires of one. Ugh. But the brunch was FABULOUS! It was a cold buffet and then you ordered a main course. The buffet was chock full of the good stuff. Jumbo shrimp, crab legs, caviar, steak tartare, oysters, prosciutto, foie gras, and tons more. We all stuffed ourselves silly. 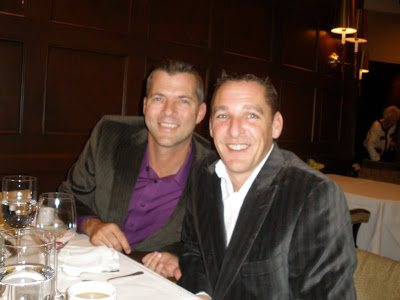 And we got a great shot of Serge and me. I think the camera focused on the glassware and the result seems a little gauzy on our faces, which, I believe, has taken years off of our appearance. Not bad for mid-forties. I hope you all had a lovely holiday too!
Posted by tornwordo at 5:35 AM

I'd love to go see the Bodies exhibit. Just not when I'm staring down the barrel of $900 in car repairs, though.

I'll have to wait until we're at my parents' later today to have a look on FB.

Lovely picture of you two! And you're right, not bad for mid-forties, not that there's anything wrong with that!!! (present company most strenuously excepted)

You and Serge are a very handsome couple.

Georgie playing in the snow, what a cheerful image.

That purple shirt really looks hot on you. Great choice!
What a great tradition to go skating too. See? keep that up and add in skating and you'll be loving winter in no time.

I'm wondering how long my tree will last...I'm tired of Christmas already and we still have the family shindig to do today. We're already preparing to be the first ones to leave. lol

Very festive shot of the family in the fancy restaurant!

You boys look super great -- all dressed up and rich and fancy! We saw the Body World exhibit here a few years back -- loved it, in spite of it being a little strange. Happy Kwanza!

looks like a great time! I cant imagine drinking something that cost 1000. dollars...even if I was rich.

Didn't have to worry about the tree this year. Same last and the year before. We do our travel during the Christmas season.

tree will be up until 1/6 at my house. FABU end pix of you two...sexay! and I recognize vieux montreal!

I'm changing all my camera settings and still going to use gauze, glad you guys had a great day and thanks for the christmas card, it was very cute.

Yeah, I haven't been able to master the art of photography. Most of my photos are unintentionally "gauzy".

I can imagine the thoughts that the rude behavior of the rich and famous brought to your mind, given your past experience. I guess I have to give them credit for consistency: being boorish and rude all year long even at Christmas.

Georgie is just TOO CUTE!! Our old beagle Jordan likes to lick the snow too. She doesn't even stop, but just pokes her tongue into the snow several times as she's walking.

LOVE the photo of you and Serge!!!

that is my favourite picture of Georgie yet!

oh, and OF COURSE, you two are two cutie patooties!!