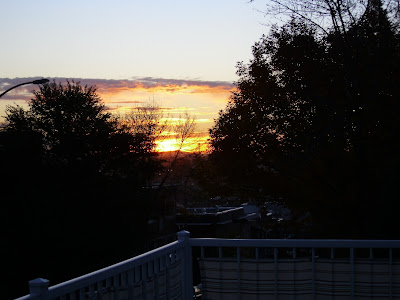 Got up before sunrise as usual these days. I don't get up particularly early, between 6 and 6:30, but the sun is coming up later and later. The sun is at that sweet spot where we can see it rise from the horizon in the tree gap. It is traveling to the right pretty swiftly and will rise off camera to the right around Christmas time. 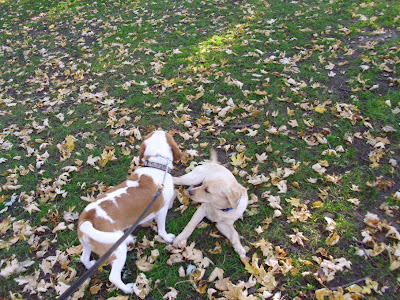 After blobbing on the computer for a bit, I took Georgie out for his long morning walk. He found a friend in the park. Most people let their dogs off so they can frolic like I used to do with Sara. I just don't trust Georgie to mind me though and would hate to ever see him run into the street. Shudder to think. 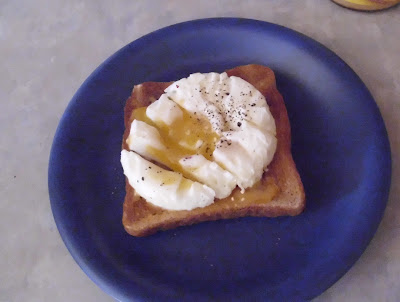 Breakfast time. I've been "poaching" the egg in the microwave and have found the magic 53 seconds to get the perfect doneness. I have a little ramekin from a creme brulee that works great with microwave plastic wrap. Just pierce the yolk first.  I used to wrinkle my nose at the runny yolks, but as in everything in my life, I'm mellowing and have gotten more flexible. Still, this was a bit runnier than usual. 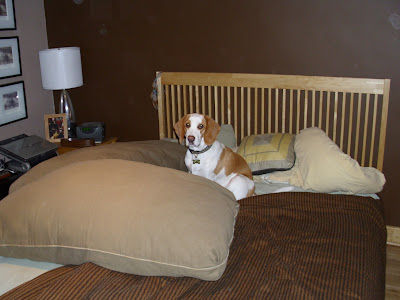 Then we started emptying the living room to make room for the new sofa. Georgie hungout in the bedroom watching us. There's not much else to add, so a little tidbit for you. While I was chatting with the nurses last week, somehow and I swear it was not me, but the subject of bowel movements came up, oh yes because people call who are worried about their elderly parents who don't poop every day. You don't have to poop every day but everyone thinks you do, I was being told. So of course I had to ask. How long is it normal not to poop? 5 days is in the normal range, she said. Can you imagine? You'd have to have a stick to break it up after five days, right? 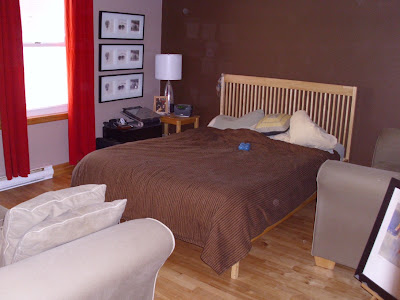 So both couches fit cozily in the bedroom. We really don't need two (or one come to think of it), but since they both fit, there's no rush to trying to sell it. Serge likes the idea that he can sleep on the couch in the bedroom too. Perhaps someone with a need will appear and we can give it away. That's what we did with our 36" TV. It was in the bedroom but we never ever used it so a friend's nephew was off to college and needed a TV. Gave it to him. Feels good to do stuff like that. 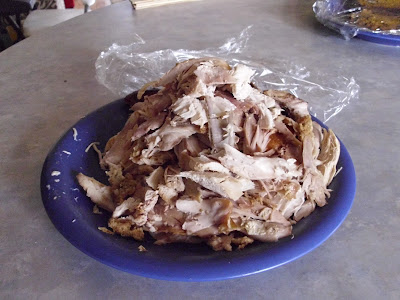 What to do with all that leftover turkey man? I made a 13 pound bird which prior to eating the thanksgiving dinner was precisely the total weight loss I'd made so far. Okay so that's why the stairs are easier now - I'm not carrying a turkey with me everywhere I go. Oh yes, back to the original question. 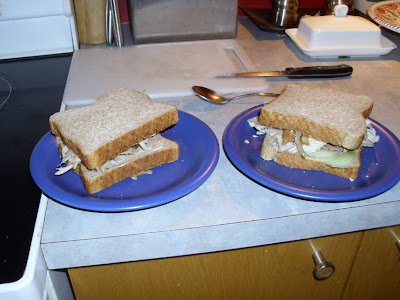 Why turkey sandwiches of course! Mine is on the right because I love a bunch of crunchy onions on mine. The butterball is so perfectly juiced that you don't have to salt or pepper the meat, it's moist and flavorful. They've got a customer for life if they don't muck it up. Anyway, totally nom nom nom. 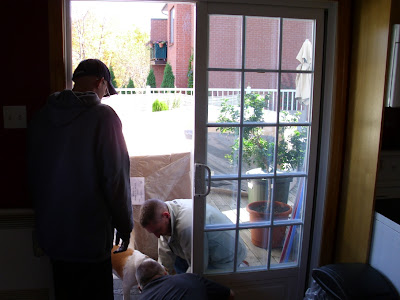 The delivery men are here! Before Serge let them in, he said to me, "I hope they don't ask us to help them."  That was pretty funny because not two minutes into it, we were being asked just that. Turns out we had to lift it up over the patio railing and it took four of us. Then it was too big to fit through the patio door opening so we (well I just hid and watched Serge get all manly) had to figure out how to get the patio doors off. I kept thinking about how we can never move from this place and what a pain in the ass it will be. 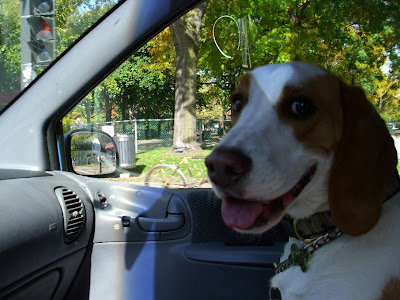 I let the men do their thing and decided to get Georgie out of there since he was kind of bugging them. He's such a good boy riding in the passenger seat. I can't get him to wear the seatbelt though and if I brake hard, he goes flying. Obviously, I try to avoid that. 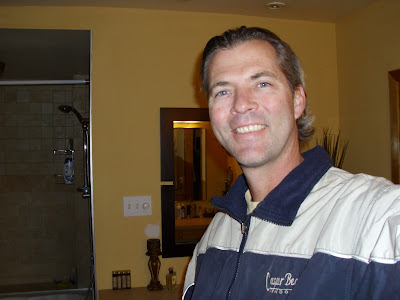 Okay I'm getting sick of it, the long hair. I can put my "bangs" in my mouth. That's a record for me. Love the feel, but the look is bumming me out. I'm gonna go in but I don't know if I'm going to ask for a little freshen up while trying to keep it long or if I'm gonna tell them to cut it all off, #3 on the top and #2 on the sides and back. Probably won't decide until I'm in the chair. 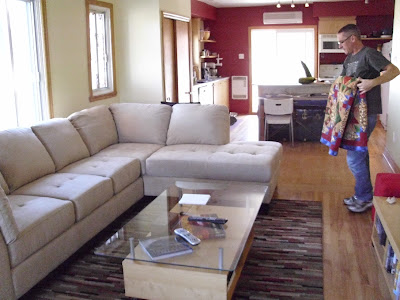 Back from the park and it was all done and set up. Georgie promptly jumped up and drooled which made Serge resemble Joan Crawford. It's super comfy but we need some accent pillows. One of the things we liked was that the cushions are all sewed in so the shape should keep better. Of course we can't turn them should we sully either. Risky. We got out the afghan and the quilt to protect it. 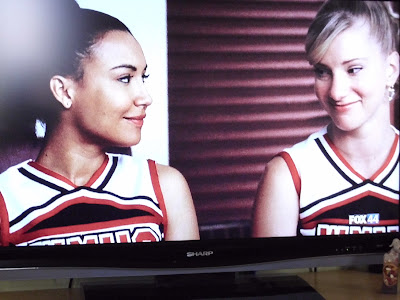 Dinner was, yep you guessed it, leftovers from Thanksgiving. I ate like a bird (yuk yuk yuk) though since I stuffed myself yesterday and gained a pound. ﻿Of course the highlight of Tuesday is Glee! Hope you enjoyed this month's 12 of 12. To see other's photoshoots of today, visit Chad's blog.
Posted by tornwordo at 8:11 PM

The new sofa looks great! Now that's a good idea for the hair....3 on top and 2 on the sides! Why didn't I think of that! I had a 2 all over in the summer....ouch!
Loved Glee this week.Imagine having that show ON TV when I was in school!
Jim

5 days without a poop requires a forceps delivery. And a tow truck.

Keep the couch Serge likes to sleep on. This should help marital harmony and Serge's backaches.

You can freeze leftover turkey in turkey gravy. Use either homemade gravy or the stuff in jars -- the stuff in cans or packets doesn't freeze well. The turkey in gravy can be thawed overnight in the fridge, reheated, seasoned to taste (I like curry powder!), and served over noodles or rice.

Hair -- longish top, a little shorter on sides. Back either needs to be trimmed or allowed to grow to ponytail length, to avoid the Florence Henderson flip you've got going on.

Get the toss pillows now, while the fall colors are in the stores. Rich rusts, browns, and greens would look great. Sofa looks like it will comfortably sleep 1 Serge, 1 Torn and 1 Georgie, but test it and let us know.

The new couch cushion issue reminds me of mine. I have the same style sofa (with a méridienne section). All the cushions are flippable except that one that's shaped around the méridienne. And I really want to flip it because it's 7 years old and is wearing unevenly. But I can't!!! Arrgghhh!

I don't like my yolks runny either. Over hard! (Of course)

I am so like Pig Pen. All I would need to do is walk within ten feet of that new sofa and it would be dirty.

Blobbing? Ummm...we've HAD this discussion. :)

Nice pics though, so I'll forgive.

So are you saying that you immediately had sex on the new sofa?

I think I need to give myself a haircut before we leave for Rhinebeck today.

Love seeing the pic of Georgie from above as I got to see his full markings. He's so adorable.

Love the new sofa too. I now have complete sofa envy and all I want to do is curl up on yours.

Your new sofa could be the guest bed. And Georgie could keep them warm.

I thought immediately of our friend Blobby when I read "blobbing." Is this wrong?

Turkey leftovers are required. If you want to know how to make the best turkey gravy ever, email me. A chef taught me. (But you'll need another turkey to do it since you've already cooked the one you have.)

I didn't poop for almost two weeks, back when I was in the military and the facilities we had at our disposal were less than desirable. lol

I'm a nurse, and everywhere I've ever done clinical work, 3 days is the max before we start following "bowel protocol" (Milk of Magnesia first, suppository next if no result). It's a rule that can easily be broken based on a person's history, diagnosis, condition, etc., but come on: FIVE days!

Lord, I hope I die before I get old.

I adore poached eggs but I've never tried them in the microwave. I shall have to experiment.

Love the pic of Georgie in the car. I make Indi sit in the back so if/when she goes flying, it's only into the back of the front seats. To quote you, obviously I try to avoid that :)

I can't wait for turkey leftovers but it's still a month away. You guys do it so much smarter up north. More time in between the two big holidays.

I always mean to do a 12 on 12 and then totally forget until I check out your blog and then it's too late.

Georgie gets cuter by the minute, the new sofa is gorgeous, and I can't imagine my hair being so long my bangs would reach my mouth (my hair has been buzz-cut for so long, I barely remember bangs...)

Left over turkey? One word: Enchiladas.

I once went for 22 days without a good poop. Yeah. Not pretty.
Love the new sofa! Did you Scotchguard it?
Your bangs are just a smidge longer than mine. I'm also thinking of shaving my whole damn head, I'm so sick of dealing with my hair. :(
I LOVE a leftover turkey sammich!

Thanks for the tips on the egg cookery! I'ma try it out!

And David and I had chicken salad sammichez that we scavenged from the bird carcass we make two days ago!

Georgie's always the handseom camera hog. You are too ... and I like the longer hair but am a short hair fiend. Much easier to deal with!

I'm hungry and want one of your turkey sandwiches, too. Love onions. Looking forward to our leftovers in a month!!!

Aww, Georgie! Such a cute pup. And yay for new sofas! With the two in your bedroom and the bed, it's like you could just have loads of people over and veg out watching TV there - more seating than in the lounge! And it's nice that you give stuff to people who need it - gives you a warm fuzzy feeling!

Saw later posts (because the link was to the Blog generally, not the 12 of 12 post), so I hope Serge is all OK now, after the dizzy spells.