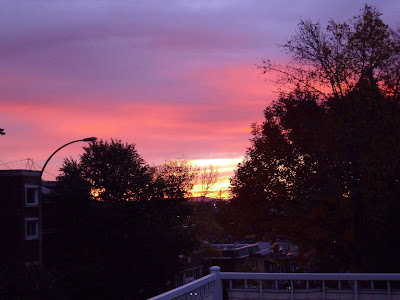 Happy Thanksgiving to all my fellow Canerdians. So much to be thankful for, beautiful sunrises for instance. October seems to be the month of the awesome sunrises. I checked the archives and the best pinky mauve ones are always in October. ﻿So yeah it's Thanksgiving and I'll be putting the bird in the oven later this morning. I went out and got the pre-stuffed, cook from frozen Butterball turkey since it was so good and easy last year. Fixings this year include mashed potatoes, green bean casserole, stuffing, caesar salad, cranberry sauce, and pumpkin bread with cream cheese filling for dessert. The diet is off today. 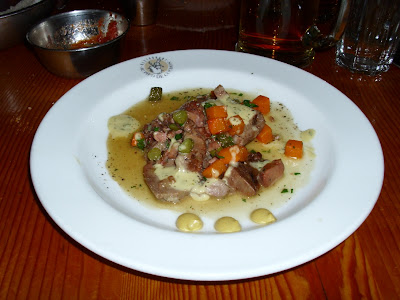 The diet was off on Saturday too as we went to my favorite restaurant in town Au Pied de Cochon. We tried something we've never eaten before - bison tongue. What was strange later is that I bit my tongue pretty badly and I immediately thought it was some kind of karma. I haven't bitten my tongue like that in many many years. It's still sore this morning and tongue wounds heal quickly. Anyway, it was an awesome meal for our 6th wedding anniversary. 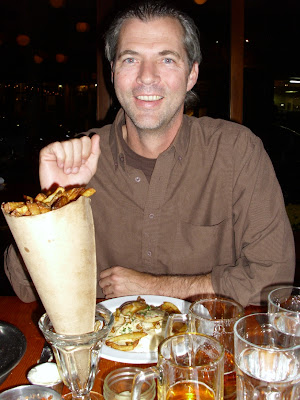 For my main course I had the legendary foie gras poutine. Talk about rich, the french fries are fried in duck fat. Oh and someone next to us ordered the pig's head for 2. It was served whole with a giant knife sticking out of it's head. I thought it was a bit over the top, but definitely made an impression. Anyway, I had gone below the psychological 180 mark with the weight, but then went back over after this meal. Cue the sad trombone. 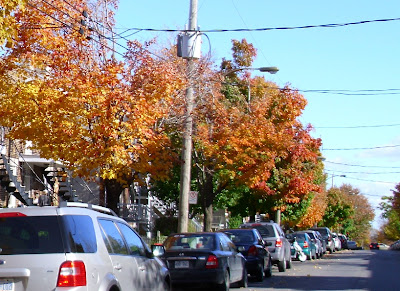 It's peak fall color time around here. It got pretty windy yesterday so a lot of leaves are down. It sure is pretty when the sun is out and the forest on Mount Royal is all technicolor. The only downside to all the leaves is the hidden turds. I think (bad) people take this as an opportunity to be lazy and not pick up after their pooch since the stool blends in with the leaves. I've had two smelly surprises this week. 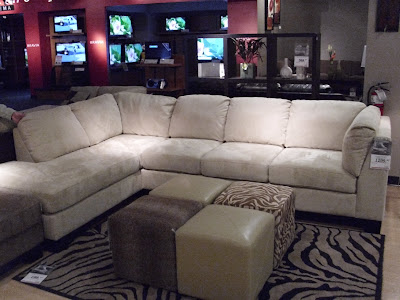 I don't know how this happens. We went out to buy a new shower curtain and somehow we buy a sofa. I blame Serge, but like he said, it's rare that we agree so readily on an item, so we took the opportunity. We decided against leather and went with the model and fabric you see above, the only difference being that the chaise portion is oriented the other way, on the right. They're going to deliver it tomorrow, so I'm sure it will factor into this month's 12 of 12. We've had our current sofa set for 9 years and we are going to keep one of them and put it in our bedroom. We'll try to sell the other. 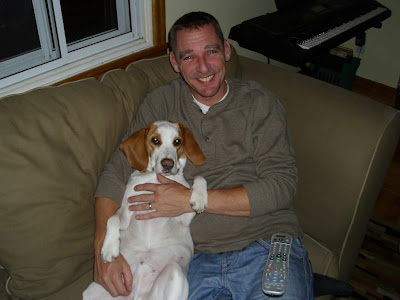 It wouldn't be a proper Sticky Crows post without a picture of the boys. He's such a love bug. Georgie that is. He's loving having me around this long weekend and I'm sure he will hang out in the kitchen with me today waiting for the scrap fairy to send vittles to the floor. Have a great Thanksgiving or Columbus Day peeps!
Posted by tornwordo at 7:15 AM

Pigs Head. Bison Tongue. Remind me not to take advice from you on where to eat! I'm a much lower fare kind of guy when it comes to food.

Serge should get a bigger say in the sofa - as it seems to be where he sleeps a lot of the time. Georgie should have a say too.

What a great closing shot!

The leaves hit their peak right around my birthday, so it's a great present every year. I think October is beautiful just about everywhere.

6th Wedding Anniversary but you have had the sofa for nine years? Congratulations on the Anniversary and the new sofa and losing the weight.

Butterball?? I had no idea they flew north of the border for the holiday.

I suddenly have a craving for duck fat french fries. I'm so embarrassed that I haven't been to APC yet.

LOL, the sofa instead of the shower curtains. That happens to me all the time, too.

happy anniversary, new couch, thanksgiving, and october to some good people north of the border!

Why am I not surprised that a restaurant called At the Pig's Foot is someplace I'd never consider eating? I hope it was a great anniversary, though, and hope all three of you have a great Thanksgiving.

Congrats on the sofa and the weight loss (ignoring the temporary holiday weight gain). All the best to you and Serge today.

The sunrises and sunsets have been stellar here too, but there isn't a leaf in sight anymore. :(
Leaf-turds suck.
Happy Thanksgiving and Anniversary to you two too! LOL!
Oh, and I LOVE the sofa!

Congratulations to you both! The boys look so cute!

Why is Serge holding Georgie back? Is he afraid he'll punch in the keys for DNN, Dogs News Network, barking good! ;)

Pigs' heads, bison tongues, Butterballs. . .sounds like a scene from that Scottish play. What is "out, out, damned spot" in French?

Is the new sectional big enough for all three of you to stretch out when an old movie gets too boring?

Anyway, may you and Serge have many more years of marital bliss -- and I hope the scrap fairy was good to Georgie!

That's a massive poke of chips!! I'd have liked to see the pig's head served. Sofa looks comfy and it's a good length for random sleep overs.

Belated greetings on both anniversary and Canadian Thanksgiving.

I could not have seen the pig's head without some serious guilt and pain. I know I'm a hypocrite to be squeamish about such things when I clearly eat and enjoy meat but I like to maintain a level of denial that at least includes not seeing the face looking back at me from my plate. I passed a trailer truck full of pigs on the highway last night and one of them had his little snout sticking out of one of the holes and I swear, it gave me pangs of guilt.

The leaves are peaking here too, and more beautiful than I can remember in a long time, I think maybe because of the lovely hot summer we had.

I really over ate some duck fat-fried fries in Philadelphia this past summer. They were so good, but it will be a long while before I am up for them again.

Yay for holidays and new furniture.