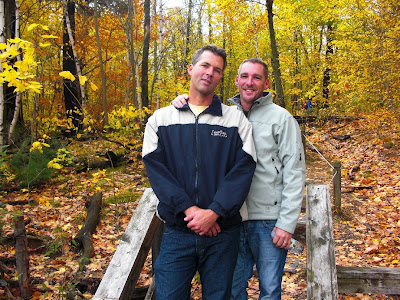 Okay all you haircut picture wanters. There you go. Pretty short again even though I said I wanted to keep it long when I was in the chair. It's fine though and easier to coif in the morning. This picture was taken out at Mont St Hilaire where we took our visiting friends for a hike on Saturday. Unfortunately, the sun didn't come out, but we still got some nice pictures out of it. Our friends from Boston who used to live near us in Long Beach came up for the weekend. Bryan's camera had this neat setting for fall foliage which really made the colors come out nicely. You can click to enlarge as usual. 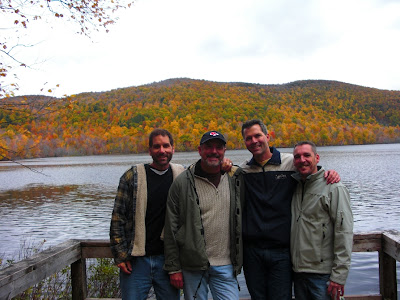 If only there had been sun, eh? Still, it was a nice group shot down at the lake. On Friday we had a humdinger of a storm, two inches in the rain gauge, and lots of high winds. I thought that that would bring all the leaves down, but there were still lots clinging onto the branches. Near the top of the summit, many of the trees were bared though. 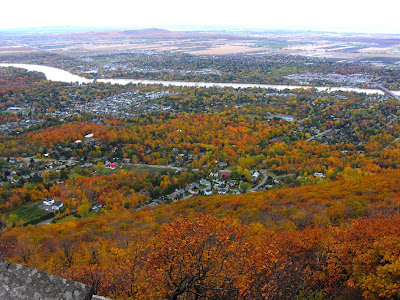 This is looking down from the sugarloaf summit. Still a lot of fiery oranges and reds down there. We talked about Glee quite a bit since we're all gleeks. When Daniel was over the other day, we watched the latest episode (we watch each episode twice - at least) and he pointed out a consistency problem. The lockers have the hanging combination locks, but no one ever removes them. In fact, the players fake it if you pay attention. Anyway, now it's impossible not to notice this. The set people should make the lockers be the built in combination lock kind, or have the actors actually remove the lock and open the locker like reality. This is going to drive you nuts now, I promise. 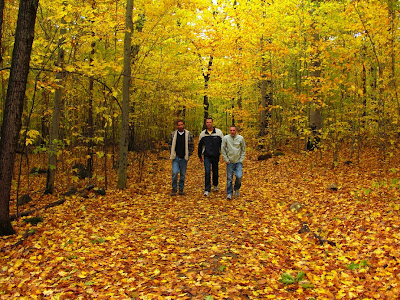 On the mountain, most of the trees had yellowing leaves. It made for quite the scene. I loved kicking the leaves up. I don't know if I can use the new word I learned, pulchritudinous, to describe the scene, but if I can, it certainly fits. Incidentally, a student asked me what it meant, and I had to admit I didn't know. Not a frequent occurence but humbling nonetheless. The student had it in a newspaper article and even in context I couldn't figure it out. It means physically beautiful. 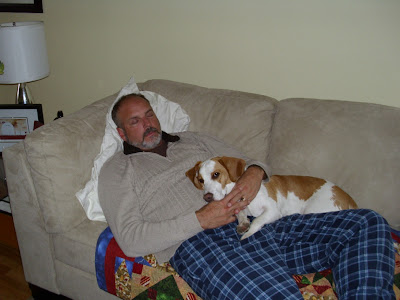 Georgie couldn't come with us on the hike since pooches are not permitted. He was good though and didn't chew anything up. He loved having four daddies for the weekend. He consumed four times the treats I suspect.

Here's a nonsequiteur, how would you like to know how to make your disposable razors last twice as long? My dad mentioned to me a while back that it's not the number of times you use your razor that dulls the blades, it's the water. Never being one to believe something just because someone said it, I tested the theory. Instead of rinsing the razor and putting the little plastic thing back on, I dried it with tissue and blew on it first before putting it away. Instead of the usual 3-4 weeks I used to get, I get 9 weeks out of the blade now. Your mileage may vary of course, but it definitely makes a difference. Try it yourself and let me know how much money you owe me : p

It's been a lovely week off (except Wednesday) and now I've got another two intensive weeks to do. These are my advanced groups so it should be a bit easier for me, but I've also got three evening classes, so I'm gonna be pooped. If you don't see me around much, that's why. Don't worry though, I'll be comin around again before you know it. Have a great week peeps!
Posted by tornwordo at 2:49 PM

I swear, the colors this time of year are sumthin' else!

we are still waiting for color down here. nice haircut, BTW.

If it was a crime for looking good with a bad haircut, you'd be put away. You guys look great. I REALLY like the leafy yellow picture. Gorgeous.

Love the pictures. Georgie is pulchritudinous. Thanks for the new word.

Great haircut - and not nearly as short as in your profile pic (which is a great haircut too). Over the summer, I decided that I'd had enough - so buzzed (what was left of my hair) short.

Looks like you had a great weekend - next time you visit your friends down here in Boston, let me know. We'll get our dogs and partners together for a "blogger meets blogger" extravaganza!

That first picture is a keeper. Married 6 years and you two look like you're on your second date.

BTW, did Serge lose weight? Those jeans look too big on him!

Heavens! That picture where the path is all covered is leaves? Gorgeous!

Beautiful pictures in the yellow woods and you look a lot younger with short hair! :-)

What spectacular foliage. Your Boston friends must have enjoyed. We don't have that much here, not yet anyway.

Thanks for the razor tip. And the razor companies want you to only use them 2 or 3 times then dispose!

I need to get out for a nice fall walk. Beautiful pics!

The leaves are beautiful! I miss them, even though it's only been a week or two since I had to clean up all 14 billion of them in my yard.

Zowie! Great fall pictures. I can't wait to move back to NYC in the next couple weeks. Cooler temps, the colorful autumn leaves and... well, there's just too much to wish for.

And Georgie is as cute as ever.

Hair looks great, but I am partial to shorter cuts anyway.

Hope your full load of classes goes well this week.

Lovely leaves. Ours are/were (they're past their prime) spectacular, too. I think it was the nice hot summer that did it but I have no idea if that's true.

Love the 'do, too. I was afraid when you talked about letting part of it be long that you were headed for a mullet :D