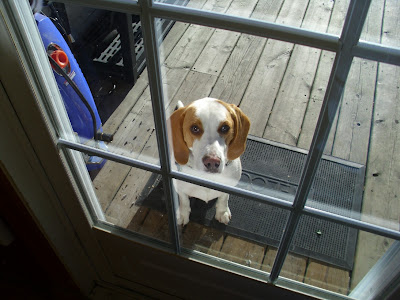 The door stays closed now. During the warm season, we leave it open and tolerate the houseflies, but now it's too chilly to leave it open. Our average high is 12 degrees now (54F) so no more in-n-out every two seconds. He's very patient though and doesn't bark or howl, he just scratches at the glass a bit.

When we were walking him Wednesday night we stopped across the street to wait for the light to change and there was a spectacular collision before our eyes. One SUV was waiting to turn left and another SUV plowed into him at at least 40mph. Both cars completely totalled 15 feet from us. We were both so shocked we just stood there staring for a good ten seconds before we went out to see if the drivers were okay. They were, and I think airbags are to thank for that. I timed it and it was a full 7 minutes before official help arrived. Too long. The guy who hit the other guy said he simply didn't see him there. I understood immediately, at night with the various lights and a confused depth perception, this is what can happen.

Got the hairs cut. I think my barber knows how to do two kinds of haircut. Buzz cut or the one I got, the lesbian cut. I told him I wanted to keep it long, but just to refresh it and clean it up. Remember when I said I could put my bangs in my mouth? Well now I can't put them in my eye. It's fine though, I've been going to this guy for 9 years and he told me yesterday that he has been working alone in his little one-chair shop for 33 years. People stop by and chat him up all the time. It's like he IS part of the neighborhood. Serge said, why don't I go to a real coiffeur instead of a barber, but I'm too loyal to do that. Plus I like the price - $12.

We have friends coming up to visit this weekend from Boston. (And are bringing taquitos and apricot stilton from Trader Joes - score!) Same gang we spent the weekend in Ogunquit with. Should be fun. I'm planning to take them to the top of Mont Ste Hilaire Saturday, where hopefully we will still have some fall color to enjoy as well as spectacular views of the St Lawrence Valley. I'll be kid kodak (as the quebecers say) and come back with pics. It has been a nice week for me, I only worked one day but the next two weeks are intensives with the nurses. I hope to finally get caught up on blogs today, it's just impossible to keep up when I do the intensives. Have a great weekend peeps!
Posted by tornwordo at 7:34 AM

We need a pic of your new haircut

That poor doggie. Left outside w/his hound eyes looking sad while you go fetch the camera to make a great picture.

Blobby said...
This comment has been removed by the author.
8:47 AM

I laughed before I read a word when I saw that sad picture of Georgie. He should be a model.

So where's the picture of your new haircut?

"People stop by and chat him up all the time. It's like he IS part of the neighborhood."

It's interesting that in UK English, but apparently not in North American English, to chat someone *up* is to talk to them with a view of getting them into bed. If people just drop in for a talk about this or that, we'd say that people stop by "for a chat".

Hmm -- It must be the same place that Hilary Clinton gets her hair cut.

Driving scares me to death these days. I wish I lived in a place, like Boston, where cars were optional.

That accident sounded scary! TOO close for comfort.....you guys were lucky.
I go to a barber too and mostly he doesn't mess it up.....or at least there isn't that much that could go wrong at this point! lol

That car accident gives me the creepies. Way too close for comfort.

Georgie is getting cuter :)

A confused depth perception? Are you saying one of the drivers was "driving while blind" -- that is, DUI?

Serge: Love ya, but any barber who has made a living from it for 33 years must be doing something right. If you don't like Torn's new hairdo, find a top-quality salon and pay for Torn's next cut yourself.

Our Callie does the same thing with the door to our deck. In and out. All summer long. When the cool weather starts, she stands at the door and gives us the look. You know the one. And will paw the glass gently from time to time. Same to come back in... one minute later.

I wanna see the hair.

There are not too many of those neighborhood barbers around here anymore. I grew up with them. Those shops were the "manly" place to be. There was *way* too much sports, fishin', and huntin' talk for me. I stuck my head in a Saturday Evening Post, but they were also the place for manly gossip and I kept my ears tuned to that.

Oh I agree, we do need a pic of the haircut.

It's hard to name a favorite pic of Georgie but this one is right up there. Adorable!