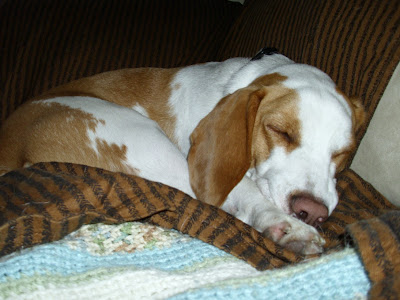 It was all going along nicely, hanging out with the dog, catching up on household chores and doing some hard core puttering. Saturday, I went across town to buy fresh corn tortillas so I could make taquitos with the roast Serge had made on Friday. I couldn't find ripe avocados anywhere though, it's a fickle fruit, so I had to buy prefab guacamole. Can I just say that there are very few things that are more divine than homemade taquitos fresh out of the frying pan? Orgasmic, I'm telling you. I totally blew the diet but it was sooooo worth it.

Then on Sunday, I got up as usual and did my morning routine and took Georgie out for the long walk. It is always super quiet here on Sunday mornings, hardly anyone out except for the early birds walking their dogs like me. But almost no cars which is odd when you live in a big city such as ours. When I got back from the walk, I came in and there was Serge lying on the floor with the phone next to his head. He said, "I already called 911."

There is pretty much nothing worse to come home to except if he had been unconscious. He was convulsing and explaining that he felt super dizzy and thought he was having a stroke. I grabbed his wrist and his pulse was like a scared rabbit's. I knew he was panicking so I tried to calm him down while trying to hide my own panic. Seconds seem like hours at times like that. The paramedics arrived and made sure his vital signs were okay. They were unable to determine a cause but worked hard to make him calm down and slow his hyperventilation. Then it was onto the stretcher and into the ambulance. Over the course of the next few hours, he had repeated episodes of dizzyness and spasms all through his body. By the time the doctor saw him (7 hours later - triage prioritizes and his life wasn't in danger) he was just a little dizzy and no more spasming. This was a good sign because a stroke doesn't do that and the other thing they were talking about (don't know in English) doesn't get better that quick either. The paramedics thought maybe it was a pinched nerve in his neck but the doctor didn't. Finally, they took a bunch (a bunch!) of his blood, sent us home and said if there was anything to be concerned about, they would call us this evening. If they call, there will be an update to this post. I did like that the doctor gave a bit of a lecture about the cigarette smoking. I hope Serge will put a new priority on that. Anyhoo, can't let an event like this go by without a picture, can we? Here he is on the stretcher waiting his turn. We managed to laugh a bit too. Hug your loved one right now! You never ever know, you know? 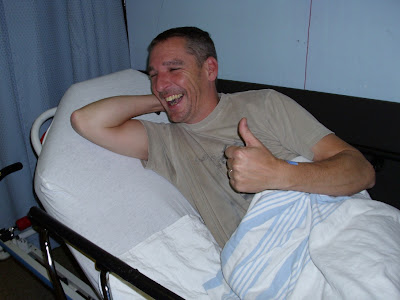 Posted by tornwordo at 5:45 PM

Sorry to hear that.
I hope everything will be fine and its nothing serious.
love to Serge...

I'm glad things seem to be improving. Healthy thoughts to everyone.

Good to hear that Serge is doing OK now. Yes, it can be so scary.
I took Ron to emergency last Tuesday afternoon after he was having severe tightening in his chest! Again after 6 hours it was determined it wasn't his heart but esophageal spasms due to acid reflux. Whew!
So, you are right, you never know when things like this will happen. But our health care does work! Even if you have to wait a bit. Take care you two.
Jim

Wow, that bit of news certainly woke me up. I am glad to hear that Serge is doing fine now and I hope the results come back with more good news. H and I have had a few close calls over the years and you are so right about loving the ones we love NOW because life can seem so fragile sometimes. Take care, you guys.

Eep! Will be thinking good thoughts. Did they say anything about there being a heart arrhythmia?

Oh my gosh! I was in a bit of a panic just reading this. I'm glad he is alright, and that you found a silver lining in it all - humor. All best to you both...and Georgie, of course.

I am sorry to hear of Serge's problem. I will worry now.
If he is really serious about quitting smoking this is the way I did it.

I still miss it but it is so much better NOT to smoke. Give Georgie a hug from the boys (Miles and Bailey) and one from me for all of you.

Pauvre Serge. Big hugs to you both

How frightening! I think it's harder sometimes to stand by and be helpless than it is to be sick. I hope that the cause for Serge's episode is diagnosed quickly and correctly and the cure is easy and permanent. Blessings to you both.

get well soon, serge! torn and georgie (and the rest of the universe) need you around!

My heart stopped when I read the first part of this story, and I still feel like crying. I just cannot imagine how scary it was to find Serge like that. I am so, so glad he's ok. Mon Dieu! You kids scared me. Take care of each other and update us, ok?

Wow, I hope it turns out to be nothing!

Good thoughts and best wishes for Serge and for you (and, of course, Georgie). I hope that something is revealed by the testing so that measures can be taken to prevent re-occurrence.
...and you conclusion is so correct! Life and love come with no guarantees.

Oh my god! What a fright for you to come home to find him like that! I hope Serge is okay and it's nothing too serious.
Life is so precious. Put the squeeze on that little bugger to quit the ciggie butts.
Keep us posted.

oh good god. i hope he's going to be ok. and i hope you're coping well with all of this. it reminds me of when my wife had her attack several years ago. it was scary but changed our life for the better. keep up the good spirits.

Wow - that sucks and is scary. Glad he's feeling better, but maybe it's time to get other tests done so you know what's going on.

Like everybody else, I am really sorry to hear about this. That would be really scary! I hope he is feeling better today.

Oh geez, that's a scary one! I'm so glad he's doing better and VERY glad he had the courage to call 911 himself.

One of these days I'm going to learn. Once again I look at your blog and see you've posted a pic of my friend Bruce and wonder how you got his pic and why you posted it. Then I remember...

Wishes for a speedy recovery - am glad Serge's trip to the hospital was a quick one. Will look forward to your next update.

Poor Serge! I hope he's feeling better now. You take good care of him, you hear?

what a dreadful experience for you and serge! i hope things turned out ok. and press the importance of quitting smoking to him. this past september (about a month after my dad died) my husband had a heart attack. it shook the world of all of us. while he is recovering and will eventually be close to totally well again, his heart was damaged. had he been smoking still (we quit 10 years ago) it's probable the heart attack would've been much more severe and quite possibly fatal.

he gets tons of hugs now. and i watch him from across the living room, just to make sure he's ok and still there.

I hope Serge is doing better today. I've spend two weekends with my dad in emergency lately so I know how scary it can be. Give him lots of TLC.

Okay that was terrifying to read, I can't imagine how scared you must've been to walk in on him like that.

Hugs to all three of you.

Poor Serge, and poor you! I can't imagine coming home after a long, refreshing walk to something like that. Please add my name to the "I know it'll be hard, but you've got to kick the butts" chorus.

Hope all is still well and Serge is recovered, would be nice if you find out what the problem was but best if it never reccurs.

wow, shocked me out of my usual stupor!Hope it was a nothing major issue, we middle agers still think we are invincible!
lots of love,
donna and nathan

OMG! I hope he's doing better now. Sending my best...sorry so late on getting to this.

Goodness, that's terrible but I think I would be calling the doctor to make sure. My doctor's never bother calling back until I get really pissy leaving messages. Hope all is good! Sending good thoughts your way!

Oh man.. my very best to you and Serge. Sorry you went through that scary thing.

I love to pop into your blog on the weekends to see how things are going ..though i don't know you! I just enjoy reading about your domestic life, Quebec, all that. So I hope Serge is feeling better, that you are both well. Georgie too!

Good thoughts and lurrrve to you, Serge & Georgie.