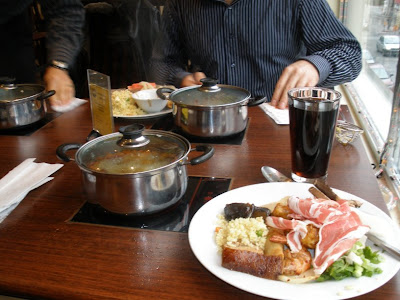 I've been wanting to try this place called Hot Pot since they opened in Chinatown last year. Apparently it's a big chain from overseas. Since I'm winding up many classes for this session, we are going out to lunch for the final lunchtime classes. So I dragged my class to this place to try it. What a mistake! First of all, there was only one other table in the place for lunch. This is a bad sign. The gimmicky table burner concept was fun at first until you went to the buffet to get the things you wanted to cook in your Hot Pot. It might look good, but everything tasted old and gamy. 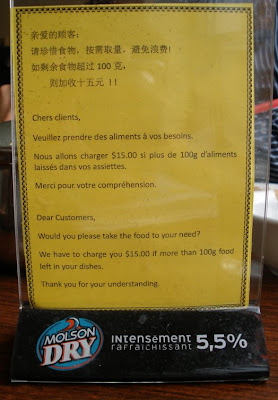 They had this admonition on the table. The problem was that there were many unidentifiable items on the buffet that turned out to be foul tasting. Three different kinds of fish balls for example. It was not fun gagging down bad tasting things for fear of being charged for leaving it on your plate. The final kicker was the price - twenty bucks! No, we won't be going back. 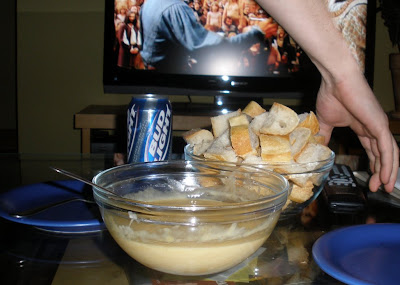 Later that night we made some good old cheese fondue. Similar concept, infinitely better. Spouse decided to spice up the fondue with cayenne pepper though. It was a bit much and boy oh boy does that burn coming out.
Posted by tornwordo at 5:36 AM

so it's all you can eat, but they charge you more if you don't eat it?

I'm sure there's a logic there. somewhere...

The cheese fondue is a much better choice. Sorry it burned. : )

I just think that perhaps you really haven't paid the final price yet for the Hot Pot! Give it a day or so more, then your final tab will show up. And the burn coming out, I'll trade ya any day! Ha!

I've learned that if it burns going in it will burn coming out.
How does the Hot Pot stay in business? I can't see how a chain of these stores could last. Just a suggestion: if you drink milk with the hot food it won't be as hot. ed

I had a curry pad thai on Tuesday and the memory lingers.

The cheese fondue looks much better. Cheese, bread, and beer. What a lovely combination!

Reminds me of our German restaurant here that always bring a big bubbling bowl of fondue to the table with the dark bread. Yummy. As for the pepper....come on, take it like a man! I know you can.

Go fondue! If you ever get to Chicago, try Geja's. All fondue, all the time!

What would happen if you asked for a doggy bag? Would someone follow you home to make sure you didn't throw (icky smelly) fish balls away?

OMG, I can't get over that sign. You should have taken your uneaten portions and put them back in the buffet line.

You just had to get that poop reference in there, didn't you?!

Nothing is worse than foul chinese food. Makes you wonder about its origins or what was on the floor that they dragged it through. Yeccch.

What a nutty restaurant. No wonder not many people were there. On the other hand, I'm salivating looking at your yummy cheese fondue.

There are a few all you can eat sushi places here that do the same thing, charging for extra food. It's even worse because you often have to order 6 pieces at a time, so even if you don't like it, you still gotta eat 5 more.

Luckily I'm not picky so it's never been a problem...even when ordering some undechipherably named item and it ended up being an entire fish with head, eyeballs, fins, everything.

You went to a restaurant where you have to pay to cook your own food?! That's insane. Even at the posh Japanese restaurant when we order sukiyaki the kimonoed server will make the first rounds and we're left to our conversation and to serve ourselves seconds.

I've seen that extra charge policy in many places. But your right about when the food doesn't taste good and you feel like you're forced to eat the bad stuff. I only wonder how much food ends up on the floor so that the plate looks cleaned off.

I love to try new places, but policies like this kind of make you want to stick to the places you know.

How many years has it been since I've had fondue?????