It has been such a busy week. I'm always slammed at the end of the session writing exams and evaluations, and coupled with the holidays, well my head is spinning. I decided to play a bit of hookey yesterday and went to the movies after my lunchtime class. I saw Milk. Wow. Sean Penn was brilliant. But I have to say that I left the theatre in a bit of a funk. Things really have not changed all that much in 30 years. At the time of Harvey Milk, I was just getting the hang of puberty. I remember wondering why that nice lady Anita Bryant hated the homosexuals so much. I remember my grandfather saying they should all be lined up in front of a trench and executed. I remember those sexual feelings I had and how hostile the world would be should they be revealed. I suppose that's changed, that it's easier to come out at a younger age now. But the world, it is still wildly hostile to us. The rhetoric has changed but the revulsion and bigotry not so much. 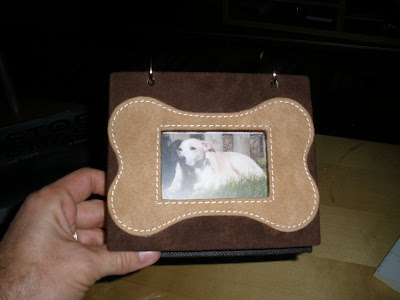 When I got home, there was the loveliest surprise. A dear blogger friend sent me a gift. This gift made me cry several times because it was a little photo album of our late dog Sara. Patricia went through all my blog archives and printed up all the photos that had Sara in them and put them into an album with this blog post at the end. The crying came so easily, but it's not as painful as it was at the beginning. It's almost good, this crying. Anyway, spouse, who doesn't have any idea who Patricia is said, "Wow, there really are good people in this world." Spouse rarely says such sentimental things, so I know he was touched too. Thank you so much Patricia, that is one of the nicest gifts we've ever received.

Oh and one more thing. This is fun in a dorky kind of way. Whack the penguin.
Posted by tornwordo at 7:10 AM

Nice going, Patricia, making all us other commenters look bad. ;-)

Wow. That is really lovely.

Remembering the good times with Sara is what the season is all about.
It is snowing here right now. It was wicked cold last night. So much for Global warming. ed

Patricia's gift damn near made me cry too. Right now. Here at work.

That is lovely. Really.

The damned penguin tempts me. I could hit that buggar (or try to anyway) for way too long.

What a sweet gift. Patricia knew exactly what you needed.

It isn't often that someone can touch another in a deep and personal way. A very good gift indeed!

What a beautiful thoughtful gift.

A couple of years ago a game circulated where you were whacking Santa to make him fly. It kept my co-workers transfixed for hours. I empathized too much.. kept flying with him in my head until I nearly fell off my chair so I had to stop playing.

I knew this was on it's way so I've been waiting to see your reaction. Isn't she just the best? I'm glad you and Serge liked it!

Aww, what a sweet and thoughtful gift. Nice going, Patricia...and what good timing, too!

I'm not even following the link today - I've whacked that penguin many times before and there are too many other things that need me to focus on them just now.

That was a really thoughtful gift. It shows the nice side of the blogosphere.

Shows there are people out there who are kind just for the sake of being kind.

I got a little obsessed with that penquin; got up to 579. What does that say about my social life?

em and I and other friend saw Milk on Monday. Great movie! I agree with your take on Penn's performance.

Gift's like the one you received are what I think gifts are for - out of the blue, spontaneous and from the heart. I resist the obligatory gift giving season that is upon us.

You helped us all love Sara by sharing her with us here.

A very generous and time-extensive project. I'm glad it took your mind off the bad thoughts you remembered.

Aww that is such a nice gift. I love the bone-shaped frame.

Re: Milk, I think things are slowly getting better. The revulsion and bigotry is mostly confined to older generations and other dwindling groups of people. I mean, yeah, it's still there, but I'm optimistic for the near future.

I'm afraid I will have the same reaction when seeing Milk. As far as we've seemed to come in some ways (Will & Grace, etc.) we seem to be in the exact same place in other ways.

What a thoughtful, lovely gift!