Poor Serge. He went out on Friday and got the suspension on the car "fixed". I put it in quotes because for me it was fine, maybe a little harsh and creaky, but hey, I firmly believe in "if it works, don't fix it". Serge was thinking the tires were going to fly off at any moment or some terrible thing would occur if we hit a pothole. Anyway, he wanted to feel safe so he took it in and got charged an obscene amount of money. Since he was spending money, he decided to pick up two external hard drives so that we can have a double back up system for all of our home computers (two, plus the portable). He came home and plugged the hard drive into the USB, expecting the "guaranteed plug and play" feature to work right away. Well not only did it not work, but the computer suddenly wouldn't recognize his mouse. Everything on his computer started malfunctioning and he ended up spending two days getting the thing to work again. There was a number listed to call before you return it so they could help you. There was an answering machine with a nearly incomprehensible message saying to call back later. Then he looked on a forum for the reviews of the product and found he was not the only one that this had happened to. He returned them of course and now we're just going to order from Dell since that's where we got the computers. 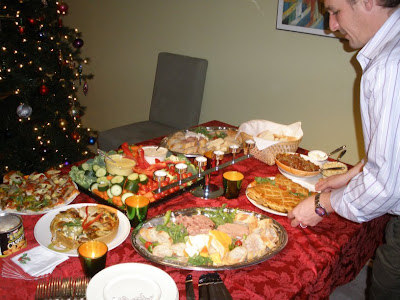 He got a little break on Saturday evening when we went over to Dan's for an impromptu potluck. I brought sloppy joes, and here you can see the spread. I won't post party pictures since I don't have permission, but it was nice to socialize around the big Christmas tree. I say nice since it wasn't horrible. I pretty much loathe socializing and am more comfortable in small pairs or trios. Other than that, my weekend was dull as I had to do all my evals for the four classes that ended last week. This week should be a bit easier though. Today I've got one class and I'm showing a movie. Tomorrow, I've got one class and we're going to breakfast. Ditto that for Wednesday and Friday. Thursday I've got two classes, though one of them is going out to lunch. As you can see, much of my job is socializing, ironically.
Posted by tornwordo at 5:32 AM

I took my car in this week, the heater is not working. Would have cost close to 1k. I politely declined, and am now looking at buying a heater that plugs into the cig lighter.

We have something in common, Torn, I would rather poke an eye out with a sharp stick than go to a social event.
That is quite a spread but I abhor eating from potluck dinners. How was the food prepared? What is in the stuff? Were hands washed beforehand? I'm a bit of a germapobe. I'd just eat what I brought. Sloppy Joes sound great. ed

The computer Fubar sounds positively irritating. I have no backup at all; I'm thinking that would make Serge twitch something fierce. I've just jinxed myself, haven't I?

I don't do well at the bigger parties, either, unless all the stars align and there is the perfect confluence of alcohol, seating arrangements, temperament and guest list. I'm still waiting.

Party pictures that you actually needed permission to post??? They must have been somethin' else! I hate that computer crap....it seems I can handle the larger things in life, but not the trivial smaller crap. Ugh.

Some guys have all the luck... Serge with the car and you with all the socializing!

I should have a Christmas potluck! No, wait, I'd have to be ready for Christmas which I am not. Plus, I'd probably get drunk and puke off my deck again.

Sounds like even more fun than the gold-plated TV cables.

When we can be bothered to go to social events, they're usually small affairs. Mostly, though, we stay home to cuddle and watch videos.

I had been using AOL's X-Drive but their announcement that they were discontinuing service forced me to alternate methods.

Used the free version of Macrium Reflect to image my entire drive (including the Dell partitions) and then snapped the new drive in and restored the image. Piece of cake!

The external drive is nothing but an enclosure, power supply and interface from IDE to USB.

I'm a little religious about two things, security and backups.

Serge's problems reminded me of all the updating I did on my computer for the virus protection software this weekend. The food looks delish. Have fun with your classes!

ed - eating germs boosts the immune system. That said, I am careful and clean when preparing food for potlucks and I take it on faith that the type of people I associate with do the same.

Oh yeah, its the worse thing you can do with your car. When you drop it off and say you wanted it checked out, you might as well hand them a blank check, and underneath the signature line is the word 'Looser'. I know this from experience.

I finally found a mechanic who is good AND honest. I will follow him anywhere.

I use a LaCie hard drive for the entire contents of my computer plus an iPod (from woot.com) to back up my music and photos. No problems, but then I have a Mac. ;-)

I'm with you (and Patricia and Ed and Mel...) on socializing. I'm terrible at small talk. Put me on camera in front of thousands before you put me in a room with one person I don't know.

Does Serge do large social gatherings better than you do? I'm not comfortable in large groups, either. Like you, I'd rather meet people in very small groups. 1, maybe 2, no more than 3.

We have serious transmission problems in our van. It still runs, but makes strange noises and jerks. Transmission=$$$$. Merry Christmas, darling.

I love social gatherings as long as there's a buffet and alcohol. That looks yummy!!!!