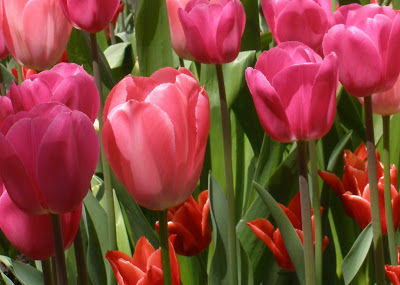 I'm such a nerd whipping out the camera at every burst of spring color, but I can't help it, like the other insects I am drawn to the flowers, nature's proof of her artistic perfection. We have had such delightful weather lately (that all ends today apparently) that the arrival of spring kind of happened all at once. The tree on the shady side of the house spit out its leaves a full 8 days earlier than last year. That's what a week of 70 degree temps will do evidently. (Yawn, he's talking about flowers and weather yet again, not to mention the 3rd person reference.)

I saw an ad in the paper how the agency charged with promoting tourism in Montreal has decided to put all of their efforts (read $$$) into internet advertising, a drastic departure from past print campaigns. I had read before that they were hiring bloggers to promote the city (I'm sure I mentioned that here too) and I sent in my candidacy. Well harumph! I didn't even merit a phone call and now all the bloggers are chosen. I don't hold any harsh feelings toward those bloggers but do wish I could have been in contention. Really, not even a phone call or thank you email. Probably because I'm over the hill. (Or have a lame CV more likely.)

Here's a funny from class. One of the students was talking about their recent trip to London and in the course of his recounting he mentioned meeting a "stereotypical American", "You know," he said, "loud and overconfident." Then remembering that I was/am American, he blushed and apologized profusely. I told him not to apologize, as I certainly couldn't argue with his stereotyping.

Over the last week, I've seen two French words used in English newspapers as though they were English words. It turns out they are English words but do YOU know what they mean? The first was "explication" which I am constantly correcting students on their use of, and the other is "abbatoir". (Blogger only thinks one of those is a real word incidentally.) Be honest now and without looking them up, do you know what they mean? Gold star for the first right answer.

Okay, I've blathered enough, Serge and I attended an event last night that I will regale you with tomorrow. It was a Bombay Sapphire event. But that's all I'm gonna say now, come back tomorrow for that. Now here look at another tulip shot. Happy hump day peeps. 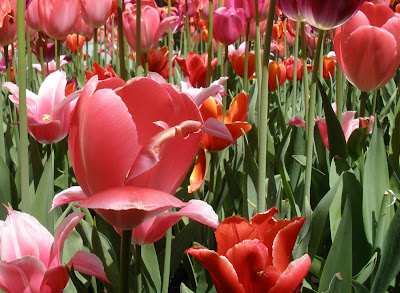 Posted by tornwordo at 6:48 AM

ABBATOIR is a meat processing establishment? EXPLICATION is a cross between defining and explaining?

Abbatoir is used in Dutch also, it means slaughterhouse but sounds way nicer (not that that would matter much to the pigs and cows that go there).
Explication is something French Canadians think means explanation, just like they think planification means planning.
Tulips are as beautiful as Bombay Sapphire is delicious.

"Abbatoir" is used in the UK as a euphemistic substitute for "slaughterhouse". When I was a reporter on a local newspaper in the 1960s the local dignitary who was opening a new slaughterhouse called the reporter over and said, "Young man, this is not a slaughterhouse. It is an abbatoir."

Pretty pictures. I've made the first one my desktop :-)

Word verification for the day : 'nombuts' Definition, noshing on asses.

I learned "abbatoir" years ago from Monty Python's Architect sketch. "Yes, and well done, but we want a block of flats". LOL. Didn't know "explication", though.

It's spelled abattoir with one b and two t's and means the place where they batter/beat down the animals for slaughter. Like battering-ram and battering one's spouse.

Hey there Sticky...I still enjoy your blog...always full of fresh writing and material. I also really like your photographs. Have a great week!!

I knew the slaughterhouse but I don't know the other one. The tulips look amazing! Mine have just popped up, no flowers yet. I think I have three though, so it will be no where near the flower show in your snaps!

There are a lot of us who can't pass pretty flowers without taking pictures and putting them on our blogs. Maybe not everyone's cup of tea, but at least we've found each other.
We were always explicating texts in literature classes, so I've always just taken it on faith the word mean to analyze, explain, find the meaning of. Is that way off? I guess now I can go look it up.
I never quite knew how to respond when I was in foreign countries and was told I didn't seem like a 'typical American.' They always meant it as a compliment, of course, but I wanted them to see how maybe what needed to change/expand was their view of Americans. Same sort of thing when people tell me I don't 'act gay'. Again, it's meant as a compliment, by people who usually honestly believe they don't have a problem with gay people, but it makes me squirm.

I can't blame you one bit for your awe of those gorgeous tulips. Had I such scenery, I'd be posting like photos.

I wonder if your student who referred to the "stereotypical American" might be a Saggitarius. I have made similar blunders more times than I care to keep count, and a friend suggested it was my Saggitarian self that loves to insert my foot into my mouth.

They didn't pick you because you talk about poop too much for their tastes. It's no different than my being dismissed due to the title of my blorg. You have to be generic (i.e. boring) and non-offensive in any way, shape or form before someone is going to give you money to advertise for them. The masses are stupid.

I think Midge might have a point there. Their loss.

Each spring you have these gorgeous shots of flowers. Keep 'em coming!

Word ver: dinglys. You know what they are.

"Explication" simply proves that someone wasn't doing their proofreading or editing job. Reminds me of the time Hydro-Quebec had a section in an exhibition on the world of electricity at the Science Centre. They allowed someone to leave the word "isolation" right there on expensive panels and other media supports, because nobody was around to read the copy and tell them they meant "insulation." (Because isolation is the French word for insulation, see...)

I totally missed out on the tulips this year here...lovely!

explication is a word that sociologists use when they want to use something other than the word explain or define.

abattoir is a slaughter house, but at one time i thought it was where the abbot of an abbey slept. that caused a bit of embarrassment once, very long ago.

I knew abattoir but I'm still skeptical on the real-word status of explication.

I also thought "expound" (used as a synonym for "expand") was made up, but that turned out to be real.

Actually, let me correct that. I just looked at the time of your post. That's about the time I'm sitting down to lunch, during which I drink wine, after which I go out and sit in the yard, and when I wake up do a little garden work.

Blog reading happens much earlier in the day.

Damn, they should have picked you to be one of the bloggers. Now that would have been interesting for Montreal. Their loss.

Beautiful tulips that you have captured for us!

Word verification: redgenes. Must be a conservative Republican.