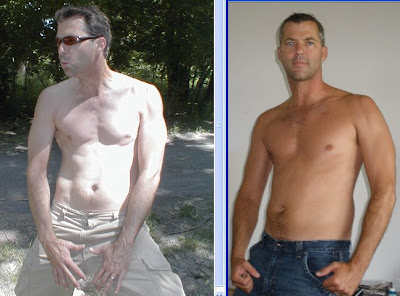 I just had to show you the depth of my mental illness. That's what Em told me anyway, that my whining about the fatty mcfatterson I've become is indicative of mental illness. An illness shared by huge swaths of society and especially chez les gays. These pictures were taken three years apart. Maybe I was too skinny three years ago. I must have been on my "all tanning is evidence of skin damage" phase then. Now I'm fully on board with "you gotta die of something, you might as well look good." Plus tanned fat looks less cottage cheesy.

This is one year apart. (Now is on the left, last year on the right.) From the waist up I'm not so worried although I ran into an old friend the other day and the first thing out of his mouth was, "You're face looks rounder." Actually, I kind of like that part. And anyway you know what they say, "Fat and happy!" 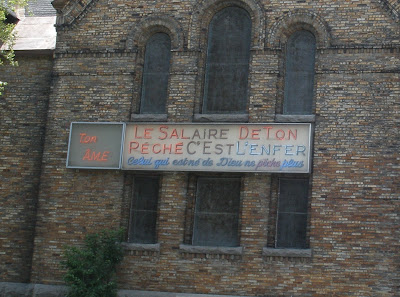 On my marathon walk Saturday I passed by this famous church here. The neon flashing sign and message are so Vegas. But wait, let me translate: Your soul (flashing on and off) The salary of your sin is Hell. He who is born of God doesn't sin anymore.

Does that really make you want to come on in? I guess fire and brimstone still works. 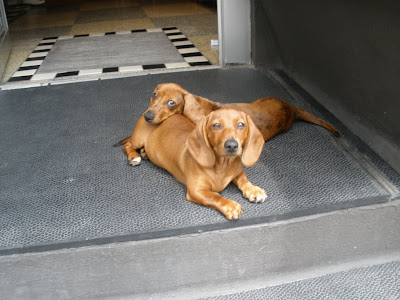 These guys were just the cutest ever. It made me want this breed again. And you just have to get two don't you so they will always have a playmate for each other. 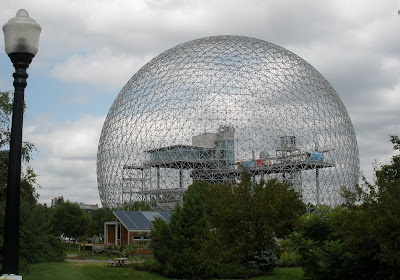 I made it all the way over to the island (took the metro under the river) where I got this shot of the Biosphere. There were festivals all over the island too which I surveyed and then I hopped on the shuttle to the casino. God it was crowded. I just wanted to put a twenty into a machine but it took me 15 minutes before I found one that was a: available and b: a nickel slot. Then I won ten bucks on the third pull so I stopped, cashed out and left. Sure it's only ten bucks, but I left a winner. 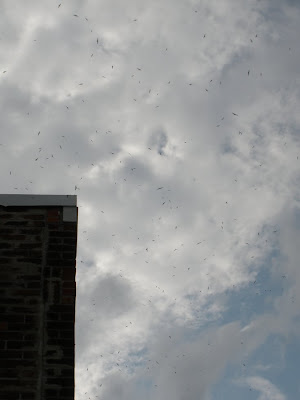 Later I noticed all these birds congregating overhead at our house. There must have been an updraft or "thermal" as I've heard it referred to. I couldn't figure out what kind of birds they were. Probably something mundane like seagulls. 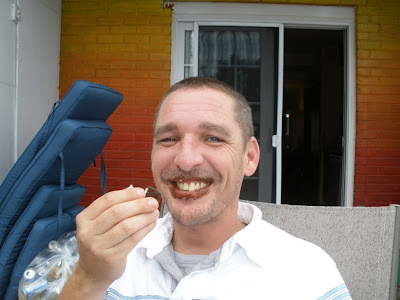 After some libations and bbq burgers we tried these little frozen cheesecakes someone had brought to last week's party but failed to mention. Serge thought it would be funny to wipe the melting chocolate on his face. It was kind of funny. He kind of looks like a clown.
Posted by tornwordo at 5:04 AM

You look great...no worries. And if fat equals happy then I'm one satisfied man!

Those dachshunds (?) are so adorable! Will the puppy stork visiting?

See, if I smeared chocolate on my lips like Serge, Mrs Coffeedog would just roll her eyes. I am not fully appreciated here at my house, I am moving to Montreal!

PS I am big ole fatty too

You look better now than three years ago.

Honey, you are obsessing over the wrong thing. You look amazing. Find something else to worry about.

If my hubby put chocolate on his lips, I'd kiss it off. Mmmm.

P.S. I'm glad you are no longer a vampire. The tan looks good.

Well aren't you just seeking support this morning?! I have to agree with everyone else, you look way better now with a little meat on your bones. Plus! We all know how much healthier you are without the deadly ciggie butts. Your face looks rounder, more filled out and you look YOUNGER. I see fat as crack filler, myself.

And Serge better watch himself! He may just get his face chewed off by some pre-menstrual middle aged woman!

You need better friends than ones who comment (wrongly) on weight gain.

It does seem you are moving towards doggie adoption sooner rather than later.

Man, you are good looking, you know it, and you have to quit worrying about looking NORMAL. You've always been thin, ever since I met you when you were 15.

I agree with em... mental illness is not so far off when someone like you thinks you look chunky.

mmm, I don't know - you might weigh more now.... but you don't look fat. you look, well, great actually. I think from now on all the pictures you post of yourself should be topless. Seeing the pictures side by side like that - I don't really see a dif.

My god, you're hideous.

The chocolate Joker look works really well for Serge though.

So I'm not a gay man, but you look much better on the top, right!

A friend of mine used to say "orange fat is better than white fat". She smeared herself with cheap bronzer, the really bad kind from 20 years ago. She weighed about 400lbs and was soooo orange. She was an heiress to the Hormel Ham fortune, she never stood a chance of being slim. You're tall, you could pull off a lot more weight, not shirtless if you gain anymore but you could pull it off.

Whatever, you still wear it exceptionally well.

My verification word is "shiga", which is the bacterial toxin that causes dysentery.

You look much better in the now photographs, too scrawny in the befores. Those weiner dogs are so cute, I want one.

Only you can judge if you are happy with how you look. Others will coddle you or criticize you regardless of your choice. Own it and don't sweat the rest of it.

Wow, finally some tornwordo beefcake! :) The dogs were indeed adorable.

You look fabulous...and you probably smell a little nicer without the cigs, too! I'm still not on board with the tanning (generally, my bod likes to burn, than fade to a tan...), but you're right, life's too short to worry to much.

"Soldrump" is my word ver, which sounds delightfully naughty (but maybe pricey), don't it?

Much hotter on the "after" photos ;)

Love the threatening flashing neon! Reminds me of a lovely garden in Washington, DC, which has the motto Quod Severis Metes (As you sow, so shall you reap) carved all over the place. It's always seemed to me to carry vaguely threatening implications.