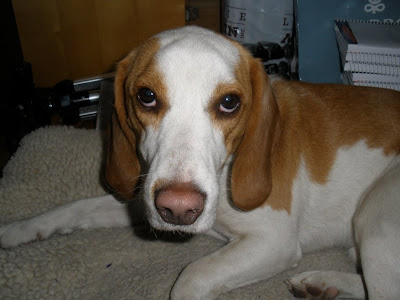 There's really not much to talk about in my life right now except for Georgie. It has really been wonderful for me having a new friend. I find myself looking forward to hanging out with him, taking him on walks and especially going to the doggie park. I can't decide which one of us likes it there better. I feel like a proud parent as Georgie is just the most playful and gregarious one out there. He approaches every dog with a "do you want to play" tail wagging demeanor. And oh how he runs. He is a really fast runner and when he really gets going he makes these strange whelping cries. It's very cute and it appears that this is called "baying", something hounds do when hunting prey. He has several different voices. The "give me my food" wail is my favorite and the piercing "my master has left me" is my least favorite. He also whines excitedly when he thinks I'm gonna take him out for a walk. 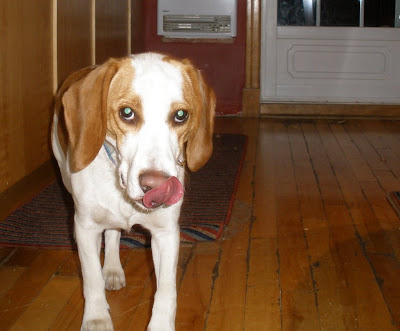 Several of the humans at the dog park have asked me if he is a Jack Russel. I always say maybe since he's probably got something else mixed in with him but then I tell them how we got him at the pound where they identified him as a beagle mix. He charms just about everyone. I keep thinking that one day someone is going to stop me and proclaim that he is their dog. I don't think I would give him up. He's stolen my heart. 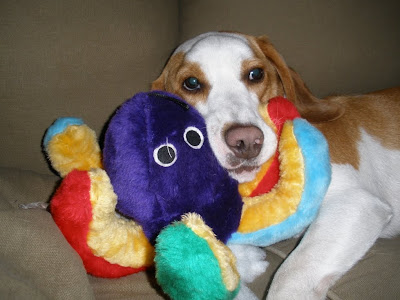 He's had very loose stools pretty much since we got him. We had switched to Pedigree dry dog food and his turds were much better although he tended to eat them. So we switched (gradually of course) to the high protein "vet diet" brand and it went back to diarrhea city. Poor little guy. So we are gradually going back to the cheap stuff and the butt biscuits are firming up again. We've already run out of all our plastic bags since the shops are charging for them now and everybody brings their reusable ones to shop with. Luckily, the pet supply place has biodegradable ones in the shape of a glove for easy scooping. Unfortunately, they come out to about 15 cents a bag - three times what the markets charge. Up here though, you're likely to get dirty looks if you don't bring your own bags to the market. Oh well, cheap food and pricy bags, I suppose they even each other out.

Here he is at dinner time.

Posted by tornwordo at 7:05 AM

Jack Russell? I can only assume they've never seen one before.

My best guess on my Rosa was basset/jack russell mix. She had the basset forelegs and springy terrier hindlegs, and whenever I asked her, "Quieres de comer?" she would bounce up and down like a jack russell and bark like a hound. I still miss that.

re: loose stools, the vet told us to add a teaspoon of Metamucil to his food (for a 40 lb dog) every day, IT WORKED!! she said that it helps dogs form a "good" stool and it won't harm them at all. Don't use too much as it will increase production to prodigious amounts of poop.

Living out in the country side as I do I often hear the baying Beagles chasing Rabbits. It sounds like...Bowl!...Bowl!...Bowl...being said in a high-pitched voice.
My Mom's doggie had the squirts until she stopped feeding him table scraps and started feeding him Iams dog food. ed

Read the ingredient list on the dog foods, and find one that has NO corn products or wheat. (They're not cheap and may be only at kennels.) Those two ingredients are the cause of most doggie diet issues, according to my vet. (Iam's and Science Diet were purchased by major conglomerates a few years ago and changed their recipes to save money. They use fillers and non-digestible protein, so steer clear of those.)

I use Purina Vet Formula Weight Management for Tazzy. I get it at the vet. It's no more expensive than the Nutro stuff that I used to feed him but he no longer eats his butt biscuits. And he had nice solid movements. They told me it's loaded with fibre to make him feel fuller, which makes me think the Metamucil idea just might work! Oh and poop picker-uppers? No Name sandwich bags with the twist ties. They are cheap like borscht! Or try your local dollar store, they usually have those hand-shaped baggies for cheap too.

Check out the dollar store - they have biodegradable poop bags in boxes of 50 for a buck - we usually pick up 5 or 6 boxes when we're there just to make sure we never run out. He's cute as all git out - I'm sure that he, Yogi and Noisette would have a blast together, all being from the hound dog family.

Pumpkin works for poop..just sayin...we have to have a bag with us when we walk dogs...but at home I have a bucket that I shovel the stuff into. Then put it in a big bag on garbage day. I keep the bucket far from the house..it works out good..plus I am not spending money on bags. If you look online you can get better deals on bags also.

Georgie is adorable..he is a lucky dog to have you both.

See? Your posts almost convince me to get a dog; but then you throw in little bits about loose stools or peeing on the bed and I think, "Not so much."

Georgie is so doggone adorable its easy to see why you are so enamored with him!

I'm with Elfbear: the Dollar Store sells poop bags for $1.

(it's not often that I get to type en francais!)

While I have cats, I switched to Eukenuba and they really like it and it is very low in corn and wheat additives.

I think you should do a post where you simply list all the euphemisms you have for feces because it seems like you have an endless supply of them.

I'm glad you and Georgie are clicking. It's always great when you can adopt a dog or cat from the pound and they turn into a family member post haste.

And the video is cute. When you made the whine he looked up at you like "What?"

I think the metamucil idea sounds great - I've also heard of using probiotics. Mind you, I gave the bf's dog some apples and her stools became extremely healthy. Just like with humans!

I love the all Georgie network!

I clutched when you spoke of his loose bowel movements. The "plumbing" for our second dog (lived 15 1/2 yrs) never worked right. We tried all kinds of combinations, but love won out in the end: we just put up with it.

I've started stalking your blog just for pictures of Georgie. (Blobby sent me.)

A teaspoon of pumpkin and a tablespoon of plain yogurt on his food will do Georgie a world of good. Birdie is right about finding a low-grain food, or one that uses less "filler" carbs. Dogs really can't digest corn in any form. Also, they use fat for energy, not carbs, so all the corn and wheat in dog food is added just to bulk it up and bring the price down.

If he continues to have loose poop problems off and on over the next few weeks, you may want to have him screened for giardia, which is really difficult to see in fecal samples, so vets often don't catch it.

My partner and I got a dog too about 1 1/2 month ago. He's a cutie. But his stool was also very soft at the beginning. Now, we switched him to one of the expensive Science Diet and the stool has started to be harder. We also caught him eating his own poop once. Disgusting. I had to brush his teeth and mouth right away. And he howls very funny too.


Are all these symptoms of doggies gotten out of the dog jail?

From the front view, I'm thinking George has some labrador in him. His nose looks just like my lab's.

what do you mean 'He charms just about everyone'.

Who the hell are these people he does not charm????