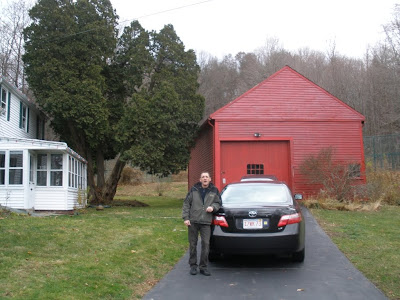 Here's where we spent the last few days. It was a lovely country house (on the left) where our old friends from California have moved. It is outside of Boston on a scenic route. When we arrived, the first thing I noticed was that the boys were smoking (why didn't I remember that they were smokers?) and even though Serge was on day five of smobriety, he crumbled at once. Boo. 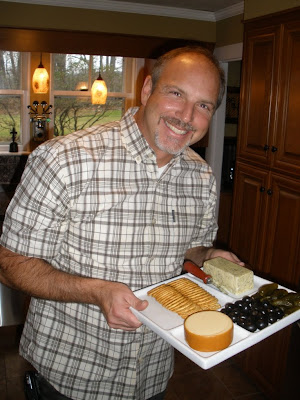 Our hosts had prepared Thanksgiving dinner which we enjoyed upon our arrival. It was really nice participating in the American holiday since I haven't been able to do so in a decade. After all, it's just an ordinary Thursday up here and usually I have to work.

Black Friday was a raw, rainy and windy day so we popped out to a couple of shops (insane, insane, insane - what economic downturn?) and I stocked up at Trader Joes before we went back to the house for card games and libations. 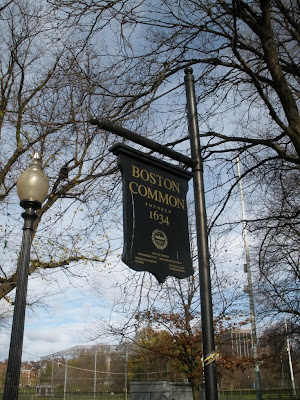 On Saturday, we took the train into Boston. I had never been before so it was neat to see all the old and modern architecture as well as the fact that the place is simply dripping with history. I know Montreal drips with history too, it's just not the history I learned about in school so I don't feel the same "wow" as I did in Boston. 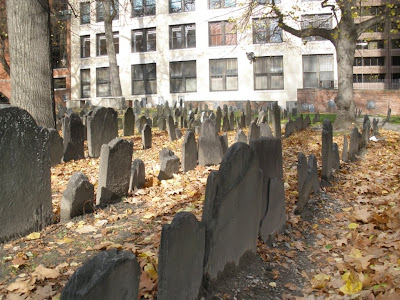 In the cemetery in the middle of the city there are the graves of such famous people as Paul Revere, Benjamin Franklin and Samuel Adams. (The person, not the beer.) 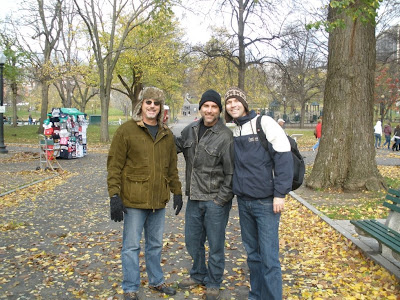 Here's me with the boys, our tourguides for the day. It was a nice day, albeit it brisk and windy. The leaves were flying all over the place. 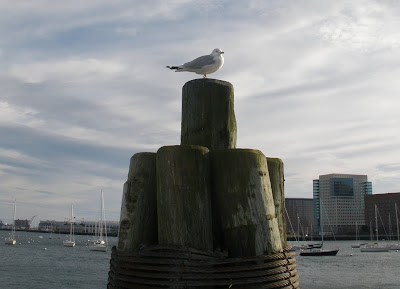 The harbor was lovely as well. I suppose this is where the famous tea party rebellion began.

The drive down and back was pretty easy. It's about six hours by car and although the roads are all marked as scenic routes, I can sum them up with one word. Trees. As far as you can see, nothing but rolling hills and trees. You know we are constantly bombarded with the notion that we are overrunning the planet but when I take a drive like that, I'm reminded just how much wild space there really is. There were lots of signs warning of moose, deer and bears.

It looks like we're going on another trip, a gift from Serge's stepmom, but I'll talk more about that next time. For now, it's good to be home with the love muffin Georgie.
Posted by tornwordo at 6:50 AM

Your friends are really cute, but hey, where's our gratuitous Georgie pic?

Historical Boston is pretty small. I loved following "the trail" through town with my sister. Never enough time.

Yes, where was Georgie? It looks like he would have loved your friends' yard -- especially if there were some squirrels to chase.

Serge, you've had a lapse, but keep at trying to quit. If you could go five days without a cigarette, you can do it again. Just take things a day at a time.

Serge needs to learn that overcoming addiction is work! (*wink! Tell him I said!)

I've always wanted to go to Boston, so I'm totally glad you got to go!

I was in Boston once in 1982. That was a very long time ago. I remember seeing that cemetery. It hasn't changed much.

Glad you had a good time. Serge, try again! You can do it!

Why did I think you took Georgie? Losing my mind I guess.

We spent the weekend in a place that was dripping with history too! I love that.

hate to break it to ya, but ben franklin is buried right here in philly! when you go to his grave, you throw a penny on it (a penny saved is a penny earned).

that being said, boston has great colonial history sites.

and we are all rootin' for ya, serge! you can do it! booyah!

what did you get at Trader Joes?

I like Boston, but I want to like it better. Maybe my work trips weren't enough to really turn me on to it.

I did the Trail (or some of it) all the way up to Bunker Hill. That was kind of fun.

Awww, we missed each other! I was in Florida while you were in Boston. (Where in the burbs? Just curious.) Glad you enjoyed!

I recognized nearly every spot from Boston itself from our own escapades. I am glad you enjoyed your visit. We too found it to be a most amazing city.

So sorry to hear that Serge fell off the wagon.

As Anne Marie pointed out, it wasn't the Ben Franklin buried there. Still, his parents are buried in Boston (and also Mother Goose!).

Now if only there was a way to convince you that Decaying Midwestern Urban Center is worth seeing. . .

I went to college in the Boston area so I always have a fondness for the city. Glad you had a great time.

I visited Ben Franklin's grave in Philly a few years ago, so I too can attest to its actual location.

If you drove south through southern New Hampshire, you were about sixteen miles from us as you passed through the Manchester area--and could have stopped for lunch or tea. You would always be welcome!

I lived in Boston for decades and loved every minute of it. There are many fascinating things left to see that are not on the standard tourist trail should you find yourself down in the Boston area again.

Oh, Vermont and New Hampshire have rather different profiles--There are fewer heavily forested areas in Vermont so you get more vistas of an intriguingly rugged landscape. New Hampshire has a softer to its fields and valleys.

Sounds like a wonderful Thanksgiving trip! I love the way Boston doesn't have a historic district nor a modern distric. They're all blended in together, and I think that's great.

Boston is one of the few places in New England that I never got to. I've heard so many nice things about it....maybe someday. Take Gayprof's advice and go see Detroit. Abandoned, urban wasteland....where else can you see that? I've even heard there are tours of it now. Too cool.