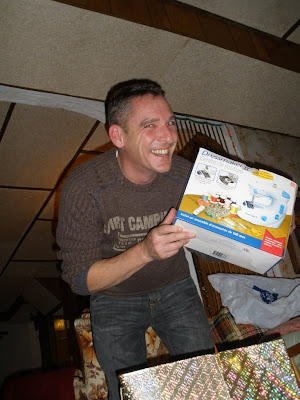 We went over to Serge's mom's house yesterday for dinner. More birthday boy festivities were held and just look at how excited he is over the Dressmaker II that he got. It's a portable sewing machine. I can't imagine what he thinks he's going to make with it but if I get a go, I'm going to fashion Georgie garments with it.

It was the first time we have taken Georgie over to visit at another human's house and, as I feared, the housetraining rules he has come to understand at home did not apply at the mother-in-law's. She's cool though, being a dog owner as well. Her dog goes in the house on newspapers and we are pondering whether or not to switch Georgie to that method. He peed and pooped in her house. Actually, he peed twice in the car on the way over there. Little fucker. I think it has something to do with the rain. It was raining quite hard when we were getting ready to go so Georgie got kind of wet as we were prepping the interior of the van. (We had to put the bench in that we had taken out to move a dishwasher.) Sara used to have pee pee accidents when she was wet too. It's like the feeling of "wet" makes them think they are outside or something. I know it seems like all I talk about is the damn dog, but seriously, I couldn't relax at all last night since I was constantly fixated on him and what he may damage. Luckily, his "accidents" were not on any carpeted areas, nor furniture. He got lots of exercise playing with Tigars so he was an instant blob upon returning home. 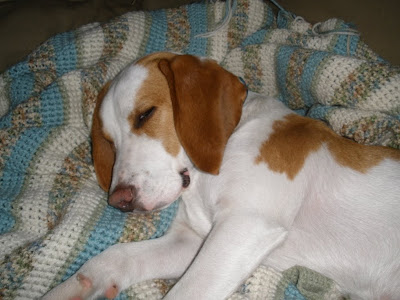 Normally, he isn't allowed to lie on the afghan that my Grandma crocheted but we made an exception last night. After all, I had bathed him earlier in the day.
Posted by tornwordo at 6:42 AM

Please tell me you are NOT going to dress the dog.

I love to see a pamered pet wearing clothes. Just make sure it is not a pink tutu. Two things I have found out (the hard way) about paper training. He will think he is on the paper when his back end is hanging over the edge. Dogs seem to think they are not as long as they actually are and he will associate the smell of newspaper with any paper you lay on the floor. The Sunday paper beside your easy chair will scream potty to him. My word verification is : furisi. ed

He is so stinking cute!

I have never paper trained a dog, but my mom did paper train her little dog to go potty on papers in the basement. Unless you have a basement, I'd nix the paper training. Just keep on him, take him out every hour when you are home and lots of praise when he potties outside.

Word verification : messrus haha spread it out and it's mess r us, perfert word for this post!

I don't understand paper training the idea seems icky to me.... when we take puppy to other houses we take him out immediately when we get there and then I sit and STRESS the rest of the entire night. There are only two houses we take him to anyhow. I just find it way too hard.

I howled at the idea of you sewing clothes for Georgie. I CAN.NOT.WAIT to see those pictures.

I like posts about Georgie. He's adorable. We aren't going to get another dog for probably a long time, though I love dogs, so when you talk about Georgie it's like I get to enjoy a new puppy vicariously (and without having to deal with puppy training!).

He can pee on me any day. Georgie, I mean.
Mason has trouble in other people's homes too -- especially if they have pets. I keep on him as best I can with the no-nos and bad boys. He's getting better but it takes me considerable time and effort and is not relaxing. So, I generally leave him at home. In fact, I think I'm going to go on the Dog Whisperer website for advice (someone told me to).

I agree with Coffee Dog.

Maybe the first item out of the sewing machine can be a fashionable version of Doggie Depends.

Sounds like the Dog Whisperer needs a visit. I never used paper, brought him outside the very first day we got Bandit, not to say he doesn't have his occasional accidents.

Male dogs typically will try to pee wherever another dog has peed. Paper training (or pee pads) just teach them to go in the house. Whatever house they are in. To me, it seems to go against what their natural instincts are because the instinct is to not pee/poop in their sleeping/eating area. My SIL taught her dog to go on pee pads and now is flabbergasted that her dog pisses all over their house. I'd keep him leashed when you take him somewhere else for a few minutes inside, then march his ass outside and show him where he needs to go, then continue to keep a close eye on him when he returns inside. What the hell do I know though, my dog bites everyone...

Forget the dog, I want to see more of that afghan! I like the colors I see. And I have a "Gramma-Crocheted" afghan as well! Two of them to be exact, one from each Gramma.

I'm very down on paper training. Tuck had been paper trained in his foster home and it made it more difficult to get him properly trained to go outside. Housetraining is not an immediate process for most dogs, so you have to be patient. Broadly speaking, I think hounds and terriers tend to take longer, too.

The little poop machine got all pooped out. Cute.

are we going all "project rungay" here?

or will you become like dr. spo and sew your own hawaiian shirts?

Awww...What a contented little dog. He looks like one of those pictures at the end of a childrens book, "And Georgie came home and went to bed after his big day at Grandma's house".

you should tell him that the One Who Came Before Him was considered by some to be a great soul. He will undoubtedly grow up to be one also, considering the love that surrounds him.

"twoonsgu"- Rather South Pacific, no?