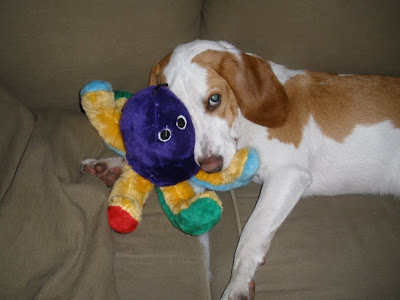 * We picked up another octopus for Georgie. That has been his favorite toy so far even though he manages to remove all the stuffing mere hours after bringing it home. Serge keeps calling it a squid because it reminds him of Squiddly Diddly. Oh how I laughed and derided him when he said that. There's no such thing as Squiddly Diddly I howled. Nothing like derision to propel someone out of their seat and to the computer. Apparently, it was a cartoon from Hannah Barbera that I had never seen. In my defense, there WERE only 26 episodes total. Couldn't have been that successful.

* I got some good news this week. Apparently I will be paid for all the canceled courses I was scheduled to give between now and Christmas. I don't feel all that comfortable earning money for doing nothing, but at the same time, I don't have to eat hot dogs and mac n cheese for the next two months. 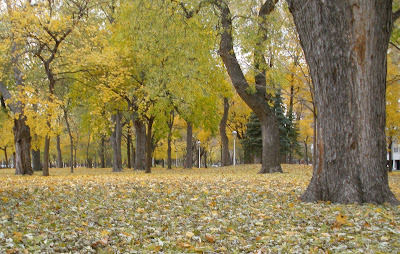 * The parks are carpeted with leaves now. This makes it hard to see what Georgie is sniffing at. The other day he was all interested in something and it turned out to be the rotting carcass of a squirrel. Gah.

* I made "beer bread" the other day from the casa's recipe. No kneading, no waiting for the bread to rise. In other words, super easy. It came out like biscuits so I think next time I'll make it with a cupcake baking dish. 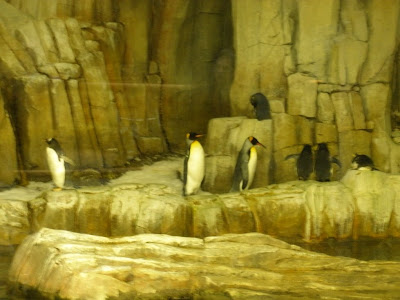 * We went to the Biodome this week since it's free for botanical garden members this month. Saw some monkeys, caymans, penguins, bats, and more.

* Indoor zoo photography simply wasn't working. I don't know if it was the camera or the conditions. If I used flash, the shot was totally underexposed and if I didn't I had to hold still for too long (as I type I'm remembering that I have an anti-shake setting on the camera and that I probably should have used that) to get a clear shot. The above shot is the best one I got. 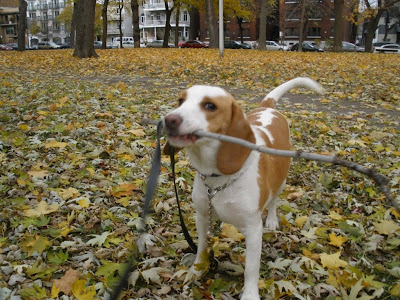 * We've had Georgie for a month and we are still learning his little idiosyncracies and he ours. For example when we walk him, he often picks up a stick and marches down the street with it. He bites the stick, it breaks in two and he stops to pick up the bigger half and then repeats. I can't figure out his stick criteria though.

* Facebook is so great for the fact that even when your friend moves to Italy, you can still keep in touch and be up on the news. I don't update my status much but I lurk plenty. I've learned not to "like" or comment on too many things or else the follow up messages clog my inbox.

* And yesterday I won two theater tickets on there to see "Bent" this afternoon. Why don't you friend Montreal Tourism liaison for the gay community, Daniel Baylis and you could win neat stuff too.
Posted by tornwordo at 7:07 AM

Georgie is SO adorable! I can't blame you for posting as many pictures of him as you do.

By the way, banish any feeling of guilt for "earning money for doing nothing," as you put it. You likely had a signed contract and the employer is doing what is right; that your students had to be deployed to look after the H1N1 vaccinations is no way your fault. And if you didn't have a formal, signed contract and the employer is still paying you, then even more kudos to them.

I'm so jealous of your snow free status...the pictures are beautiful! I love the fall so much, I wish it lasted longer.

I'd never win an arguement if it weren't for the Google! LOL!

In a store here they sell a dog toy that's a squirrel with no stuffing inside. Kind of creepy, like it's been run over so many times it's just skin but sounds good for a dog that likes to tear out the stuffing.http://www.overstock.com/Gifts-Flowers/Large-Skinneeez-Stuffingless-Dog-Toy/3916802/product.html
My dog too loves sticks, the bigger the better. He tries to bring them into the house through the sliding door but they're too big plus we won't let him. Love the Georgie posts. :)

I'm glad and even relieved that you will be paid for the rest of the semester. It's only fair. They are the one who breached the contract. You shouldn't be punished just because they are waaay over reacting to the flu. If they are canceling classes now, what will they do in a few months when it *really* becomes serious? The fools.

Squiddly Diddly was AMAZING. Srsly. I have the videos at home, I'm sure. :D

Both my doggies love to chew little holes to tear out the stuffing in their toys. Restuffing the toys makes them last longer.

I think it's them being very instinctual, doing to stuffed animals what they'd do to actual prey. Tramp is cairn terrier and Truvy is a terrier mix. What most people don't think about is the breed's background. Terriers are killers. they are breed to hunt and kill rodents which is why they are so tuff and strong.

I was always told that the hard thing with beagles is that they become a bit too focused on following scents and then become oblivious to voice commands. True or not true for Georgie?

Whatever the case, très adorable.

Also, yea for the pay. They were the ones who canceled, no? It's not like you wanted to skip out on the work.

Holy shet, that dog is adorz.

Was it one of the white squirrels?

As GayProf says, hounds are generally slaves to the nose. So long as he's on leash, though, you should be reasonably safe from having him run off.

You can also change the e-mail settings on your Facebook account, so it doesn't e-mail you that much (or at all).

I think getting paid for doing nothing rocks!

Droba: Story of a Woman said...

Biscuits??!! I'm not even sure what that means! I haven't had a loaf that failed me yet. Maybe it's the conversion from farenheit to celsius that left you underwhelmed.

You get paid, not exactly for doing nothing, but for agreeing to teach classes. If they cancel the courses, it isn't your fault. Enjoy the time if you can.

Oh, and for dog toys - our Great Dane has had several since she was a puppy and hasn't put a serious dent in any of them yet. They are all Tuffy toys. I don't know if they are worth looking into for you, but the octopus made me think of it - http://www.vipproducts.com/retail/files/index.php?cPath=27_51&products_id=70

Have fun during your time off!

I'm so glad you're going to be paid for the cancelled classes. It seems fair.

That top pic of Georgie is darling. The posts about him make me happy :)

That's funny how he does that with sticks. Too cute.

I loved Squiddly Diddly. I think he was gay. He and Sponge Bob would have been friends

that picture of Georgie with the stuffie is just too cute for words!!

nice that you don't HAVE to eat Mac'n'cheese with hot dogs.... but you're still gonna 'cause it's so tasty... right?? HAHA

I wouldn't feel that you are taking $$ for nothing - you committed your time to them and the fact that they are choosing not to use it is irrelevant on the $$ front! All the more stuffies for Georgie!!

Georgie is great! I never congratulated you on the new addition to your family, so: congrats. Our Cody loves sticks too. The criteria is very mysterious.

The word that you will be paid despite the cancellation of the courses is indeed good news. I think that is a rarity around here.

I'm so happy that you are getting paid for the cancelled classes. Also, I love that octopus toy. I want one for me.