Unbelievable. I could not roll my eyes any further back in my head when I read about the outrage over Obama's bow to Japan's president. You'd think the ridiculous screechers would have preferred Obama lifted his leg and peed on him instead. Apparently to some, Obama has disgraced the nation by respecting the other country's culture while on their soil. I honestly don't know what is wrong with people. All I can think is that they are so narded up because we have a black president and even further panty wadded because they can't publicly criticise him for his skin color that they invent ridiculousness such as this. Tell you what. Let's switch. You guys can have Stephen Harper and we'll take Obama. Wouldn't that rock, Canucks?

I'm working eight hours a week for the next month and then I'm off for 6 weeks. Yay, I get to read, knit, walk Georgie and play games on the computer. I'll probably plan my lessons for the intensive courses that start again next January too. As long as I limit spending to the essentials, I'll be fine. I added a blog on scrimping, saving and traveling but haven't set it up except in name. I may work on that over the next couple of months as well. If I could make a few bucks from click throughs to sites like Priceline and Hotwire and books I recommend on Amazon, it might be worth a go. Other people are doing it and making money, so why couldn't I? Serge and I are kicking ourselves over how we were such early adopters with the internet but didn't buy up domain names like we could have. Oh well, you know what they say about hindsight. So true.

Georgie's poopy troubles are over. Pedigree Health & Vitality has solved the problem. I'm quite happy about it because of the obvious reasons but also because we don't have to spend oodles to figure out how to appease his digestive system. Look here he is with a spot of peanut butter on his maw. Slurp slurp slurp slurp slurp slurp slurp. 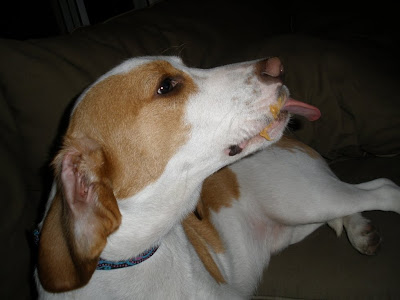 Posted by tornwordo at 7:45 AM

Can't stop laughing at the image of President Obama peeing on Japan's emperor. That's going to make me smile all day.

You knit?
That's so sexy

so, you knit...are you on ravelry so that I may friend you...and will you be posting pix?

and you can keep stephen harper - we just got rid of bush son, remember? harper is cut from the same cloth as son.

I swear Georgie is so cute, I may have to come up there and steal him from you.

Agree the Obama bow thing is way out there. I think your observations about color are right on.

Great idea to swap Harper for Obama. Then Americans would actually have something to complain about

Hmmm, I missed the Obama thing. I guess I need to look at more non-gay news.

Ooooh six weeks off in the middle of winter...AWESOME!

I love that the cheaper dog food settled his belly down and you didn't have to put him on some crazy special diet!

I agree with you that most of this Obama backlash is motivated by racism. It's as if the Republican party's new motto is "It's okay to be racist again!" and followed by in a hushed voice "just between us, we never stopped."

LOL, wonder what Sarah Palin would have done instead?

I wonder if race factors into it anymore. The Repubs are looking for anything at all to criticize Obama, and I think a large part is simply that they are sore losers. His winning the Nobel Prize was a poke in the eye for American to them. I mean puh-lease.

HAhaha that peanut butter on him probably kept him busy for a while.

I guess the republicans would have preferred that Obama puke on Japan's president like Bush Sr. did on Japan's prime minister back in 1992...

It's good for the creative juices to have time off like that. Let us know about your new blog.

I agree on you about Obama. I'm not sure if you saw it but there was a spot of TV in response to the criticism of the bow ("No American President has bowed to a foreign leader!"). Except - ah, yeah - only two others *Republicans* Eisenhower and Nixon!! And should we not mentions how little Georgie Bush held hands with the Saudi King and groveled at his every wish.

I don't ever want to be famous. I don't want people to criticize my every move. I do love the mental image of Obama lifting a leg to piss on Japan's president.

I stick to gay news, mostly. It's a biased view, but I get the gist of what's going on in the world, and I'm OK with that.

Georgie looks like he's sticking his tongue out at someone.

Well, they aren't really winning the health care debate (without resorting to crazy-ass stories about abortions and "death panels"), so they might as well focus on protocol. This nation needs an intervention.

I've been thinking about trying to make a little money from blogging but haven't clue one how to start.

So sad to be middle aged and computer illiterate.

(Glad to hear the pupper's poop issues have been resolved!)