Yesterday I was poking around for travel/medical insurance since I've been reading horror stories about people who have accidents while traveling to the states and end up with astronomical medical bills. Apparently, and this should be more widely known up here, we have very limited medical coverage while traveling outside our home province. We are "covered" but the provincial health plan only pays what the "cost" is evaluated at here. (These are not scare quotes, these are "I don't believe the word is correctly representing its meaning" quotes) For example, they pay $100 a day for a hospital stay. So if you spend a night in a US hospital for whatever reason, you'll be responsible for everything over that amount which as you can imagine, runs into thousands of dollars. So I got us a Blue Cross plan that covers us for as many (up to) two week trips outside of the province that we take in the coming year. At $160 for the two of us, I find that a bargain for peace of mind while traveling. I haven't required emergency medical services in decades but as Serge said, "You're getting older so you never know." I can't remember how old my grandfather was when he had a terrible mishap on a cruise ship. Seems he got seasick and when he threw up, he ruptured his esophagus. Had to have emergency medical rescue replete with helicopter if I have the story straight. (mom?) Anyway, they didn't go bankrupt so they must have had some good insurance. There was an interesting piece in the LA Times yesterday about a doctor who went to the emergency room for some stitches, in and out in two hours, and the bill came to $5000. It was interesting to note that the tetanus shot he received was billed at $360 even though the doctor knew the true cost of the shot was $27. That is some markup. 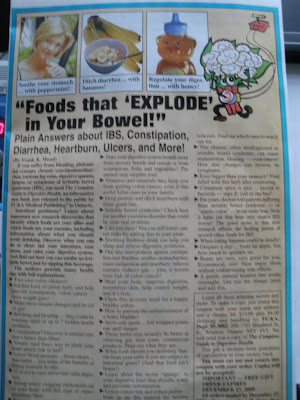 This seemed out of place in the coupon pamphlet from the newspaper. I thought the firecracker cauliflower figure was funny.

Oh I bought something else yesterday too. Mailing labels. This might be a yawner for you but for me it's quite the treat. See, normally when I'm faced with the possibility of purchasing something, I assess whether or not it is REALLY necessary. So for many years I have wanted return address labels (especially at Christmas card time) but have always decided that since I could just write the return address, it wasn't really necessary. Indeed, if you have ever received a missive from me, the return address was hand written. Well, yesterday Serge was admonishing me for never treating myself, and I realized he was right so I splurged. Sure it was only a ten dollar splurge, but I'm looking forward to slapping those things on the cards this year.

Let me see, it seems there was something else. . . Oh yes, and I hope this isn't too blaringly codependent but spouse didn't have any ciggies yesterday. He claims that he is a non- smoker now. Cheerleading in the comments is welcome.
Posted by tornwordo at 6:45 AM

Congrats to Serge! Now he not only looks great but smells great too! It is really best not to smoke in a house with a small child (Georgie) He can smell the tobacco from 10 kilometers away. ed

Keep it up, Serge! Set up some rewards for your milestone days. You can do it, honey.

Seems to me stickers are more trouble than writing the return address. My sister, who used to work for the USPS, told me my nine-digit zip code is enough of a return to work. So I write my last name and my zip on my bills.

I was wondering when we'd get another poop post. This one's not bad. Don't let it encourage you, though.

Oh, Torn! Tell Serge I've got my min-skirt on and the pompoms awavin'! You *know* I'm leading the cheer for him to be cig free!!

Thanks for the heads up on the medical insurance situation. Once the son is up there and subject to your plans, his visits home to Mom and Dad will fall into that category. Yikes!

Obviously you have never made a charitable contribution and are not on every charity's mailing list. I have more return addy labels than I will ever use. They keep sending and sending long after I no longer donate.

A Pat on the back and a big hug to you both. Keep it up Serge. Watch how much better food tastes to you now and don't over do on that either.

I found something that helps with Mile's chewing. I got a big twisted rawhide for him and for Bailey- He spends all his time chewing on that and does not bother the other things. Oh and my nephew got me a small wastebasket with a lid - that was wise of him as I am now making him clean up after his dog.

When traveling abroad it probably is a good idea to get that extra coverage.

Mrs Coffeedog and I were just musing we needed to get addr labels with both our names on them. As it is, I get plenty of free labels form the various charities I donate to.

"You're getting older, so you never know"?? I'd have turned him over my knee for a good spanking. In spite of it being the truth. Happy travels!

Every year when I sit down to do my Christmas Cards, I think to myself "I need to get some labels!" And I never do.

If Serge quits smoking by going cold turkey, I will be proud of him but totally disgusted that he did it "just like that."

It was 1975 when Grandpa ruptured his esophagus. He was 64. Grandma and Grandpa had trip insurance and received their trip costs back. Grandpa's medical insurance at work paid out of area medical expenses. The cruise ship said it was going to charge for the fuel it took to take the ship into Cuba (Grandpa went to the hospital in GITMO) but they never did.

I haven't been by the ol' blog in a while. It's nice to catch up a bit. Yeah for Serge! Hope it sticks. Georgie is adorable! Good luck breaking the chewing habit.

Excellent news from Serge! Keep up the good work.

David orders return labels, plus we have a return address stamp that sees a fair bit of use. I'm a fan of them.

Great big congratulations to Serge!! Keep up the good work. Is he on the QUIT network (or whatever that website is that you use)?

I was wishing I could read that article with the cauliflower but the enlarged pic doesn't allow for it. Bummer.

See what I did there? ha!

What Lemuel said. I have enough return address labels to last me the next 10 years. I get them in the mail free from various charities constantly. I've started throwing them out because I have so many.

thank g-d, now i'll get a holiday card AND i'll be able to read the return address :)

Serge: Keep it up! You have to completely quit. Not even one little puff. No one can just cut back -- the habit will always ramp back up again.

T: It took me a moment to figure out why you'd want to pay for return address labels...after all, every charity and its mother-in-law seems to send them for free. Then I got it. You wanted couples' return address labels -- something along the lines of "Mr. TornWordo and Mr. Serge" or "Mr. & Mr. Georgie's Dads".

Did you know you can buy blank ones you can run off on your computer printer? They can take a bit of fussing, but...

Congrats to Serge and Keep it up!
:)

Congratulations, Serge! It's nice you two can support each other for this.

Little 'luxuries' like return labels are often the most satisfying. They're highly personal as well. I'm glad you took Serge's advice.

I always get travel insurance and $160 for the year is such a bargain.

I'm so happy for Serge's start on quitting. Imagine all the $$$ you guys will save!

Yea to peace of mind and going sans ciggies.

I've never thought of it before, but the medical insurance while traveling is a good idea.

I too get excited about return address labels and have already received my special holiday ones.

Congrats to Serge for a non-smoking day!

I like your site a lot. There's a lot of interesting stuff on here. I'm a first-time visitor, but I'm liking what I'm seeing. I have a site that provides inspiration and guidance to people around the world. I'd like to exchange links with you to help spread some traffic around. Please let me know if this is possible.

This is the first time I have fallen into the Sticky Crow well - fascinating!

I work for a worldwide travel insurance company and of course I recommend it vividly. When I see the enormous bills coming in (especially from US hospitals), our customers are glad to have us.

Since when is honey explosive?