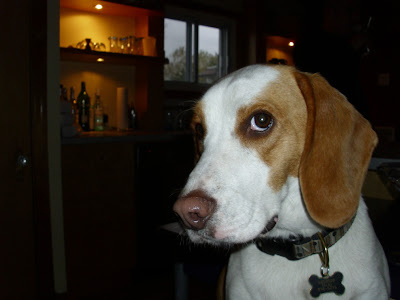 What are you lookin' at? Man, he has been keeping me sane this week. I swear I have not had a moment to myself since last Sunday, but it is so great how he greets me and knows the routine so well. Morning walk is right after my shower. He wakes himself up goes out with me and then, according to Serge, he goes back to bed and sleeps til 10:30.  When I get home, he waits for me to change out of my work clothes and then we wrassle for a bit on the bed. Round about 8pm he reminds us it's time for his evening walk. Serge takes him out (usually, I had to do it Tuesday) during the afternoon. Tomorrow, I'll take him for a long spell at the doggie park.

So it was the week not from hell really, just one of those weeks where you are just bouncing off the walls busy. We had two fires this week. One in the dryer which wasn't technically a fire, yet, but combustion was definitely in progress. What's weird is that I went and checked on the laundry for no reason really as they had only been in the dryer for 15 minutes. I never do this. This is one of those uncanny intuition things that probably saved the house from burning down. Giant plumes of smoke came out of the drum when I opened it, shrieked for Serge, and ran to open windows and get a fan to blow the smoke out of the house. We took it apart and sucked all the bad lint that had accumulated. Then a few days later, the Convectair wall heater caused a small electrical fire that Serge heard snapping and crackling from the office. Turning the heater off solved that, but there is a big charred area now in the thing. That particular model is $600 to replace. It's the one next to the patio door in the kitchen so Serge is lamenting how cold it is when he smokes with the door open. True, there was ice this morning on the patio.

One more week. Then my life will get back to normal. Some of my students are nurses in the hospital who are sometimes obliged to work 16 hour days. And they have a family with kids, work full time every week plus overtime often. I just can't imagine. Unless you absolutely love what you do to the extent that you like it more than any other activity in your life, then that is not worth it. I suppose if I could get paid for playing Scrabble, I would do it. But I don't want to really do anything 40 hours a week, except sleep. Anyway, one more week of full time and then it's part time until January. Crap, I shouldn't say that, it's almost like daring the universe to make me have to take a bunch more hours before Xmas. I'll try to post a weekend update later Sunday, have a good one peeps!
Posted by tornwordo at 5:22 PM

The Pooches have that way about them, don't they? They seem to be our consistent, centering sort of thing. To keep us sane and normal. Just today, I told Mason that I appreciated him for every good thing he has brought into my life.

you should probably call someone in to clean the dryer vent...I had that done this year when my clothes were taking too damn long to dry. lint is a fire hazard that we don't think about until it's too late! and I would not want anything to happen to the 3 of you!

This year here at school is killing me. I had to cancel my weekend plans just to get caught up. I've been thinking a lot about the love of my job.

This year it's not so easy.

But hey, I'm not complaining.
Not me.

Charred and smoky clothes + repair or replacement of wall heater = aren't you glad your teaching skills are in such demand?

However, those long work weeks are a pain in the butt. Play with your guys, take lots of naps, and relax this weekend.

P.S.: Looks like Georgie was trying to tell you to have a stiff drink -- and to fix him one while you were up.

So very sorry to hear of the fires, but happy to read of the less than disastrous end to each incident.

That reminds me to clean out my dryer. Home fires scare the hell out of me.

It's uncanny how quickly dogs learn our schedules.

Our dog goes back to sleep as soon as I walk her and leave for work too!

So amazing about your intuition. That certainly could have been a huge incident.

We had to call in a chimney sweep to clean our vent----it was full of lint-terrible.

I usually work roughly 45 hourz a week. I lovez it, but it I AM quite the pooped out party-pooper come Friday night...

Of course, I'm looking at moving to day shifts, which will mean a nominal 36 hr work week for me. Which means that I'll have time to take on a second job.

Dogs do love routines. It's funny how the adjust - the silliest of things they'll want to repeat. Like Bandit getting a hug and a pat before letting him out in the morning.

Thank God you caught the fires. Reminds me I need to get my dry vent cleaned out. As for the wall heater, perhaps if Serge stopped smoking you wouldn't need it! (Hint, hint)

Yeah, I don't know how people can work full-time and do school too. It's a lot!

I'm a total spaz about lint vent fires! It's one of my obsessions!
I'm like you, I've yet to find something other than just plain old living that I want to do 40 hours per week! Do we have some sort of defect or is it everyone else:)
is Serge going to quit smoking or will he replace the heater? Enquiring minds want to know.

Sorry about the fires. I hope the weekend has offered a break.

I am fascinated by that inner sense we have when something is wrong and I have almost never been sorry to have followed it, no matter how crazy it seemed at the time.

As much as I lament Indi's absolute need to maintain our routine (sometimes I just wanna laze!) I love that she knows the drill and pushes me to continue. And yeah, she keeps me sane through everything, no matter what.