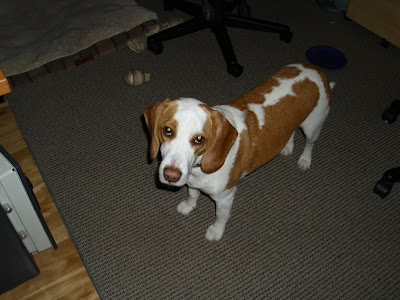 He's going to get lots of attention now that I've got my life back. My schedule is lighter until mid-January so me and my Georgie are gonna hang out a lot more. I've got to get him more exercise since he has gained 8 and a half pounds, or 30%, since we got him a little over a year ago. We've already reduced all cookies to half-cookies and reduced the meal time quantities of food as well. I've been trying to get Serge to stop feeding him in the morning, but he refuses. He may be right, Georgie does have a mean streak and I'd hate to see him chew the sofa or something.

Serge is better this week although he had other episodes like the one on Sunday (minus the anxiety) and just goes and lies down when it happens. The few times it did happen weren't as severe as last weekend, thankfully. The doctor never called, and he assured us that he would call even for the minorest of things. So that would mean everything was normal. Today is the first day since that he's said, "I feel good today." So there's that. I'm not so fixated on the finding a diagnosis as much as I am just wishing it away. Wish with me, won't you?

This week I listened to talk radio on my commute. There were mostly topics of interest solely to Montrealers and on Wednesday they were talking about something with the immigrant situation here when a caller called in and in his discourse said something like, "Well jews control hollywood," in response to how immigrants are portrayed in the movies. It wasn't said with animosity either, just kind of matter of factly. The radio host got irate and told the caller it was the most heinous anti-semitic comment he'd ever heard from a caller and chewed him out and hung up. I would imagine it's a bit of an exaggeration, but how is it a hostile comment? What about saying the mafia controls the construction industry in Quebec? (which is a real story up here) Does that make me a mafia hater?  If I said gays control the fashion industry, would that be homophobic?  I don't get it, could someone explain?

The weight loss is coming along nicely, I'm almost done, just a couple more weeks I think. Unfortunately, and I can't ignore the fact any longer, my hair is thinning, especially at the crown. And here I thought I was going to escape that particular masculine roulette outcome. This time, even the barber mentioned it, ugh. Oh well, nothing to do but own it. Okay one more thing before I go. Coffeedog sent me this this week and it made me squeal. And I learned what a dirty sanchez is. I feel so edified now, lol. Enjoy!

Posted by tornwordo at 4:24 PM

WHY did I click on that video. I know better than that.

I'm so glad Serge is better, but don't you think you ought to find out what's going on? Google the symptoms or go to WebMD and see what's up.

It seems just about any self-defined group is ready to take offense. People have confused discrimination with disagreement and they are not the same thing. I am not a victim just because you disagree with me or my tenets.

In school we were taught that we shouldn't use food analogies to describe pathologies, but honestly, they just work so well.

glad to hear serge is better :)

Funny story... one day in the summer I was on Ste-Catherine and saw a guy who looked familiar, so I smiled and said hello. He looked past me, and I realized maybe I didn't know him.

It just dawned on me that it was Serge, and of course he doesn't know me, I know him from reading your blog.

Wishing won't make the seizures go away. And what if one comes on while Serge is driving or in another situation in which he could harm himself and others?

He should at least call and get the test results. Maybe the doctor forgot to call and is wondering why Serge hasn't.

I hope Serge feels even better soon, and wish you and Georgie good luck with the weight-loss regimes.

Do NOT assume the doctor will call with any news - good or bad. You guys need to call him and get a copy of any and all results.

He should be doing follow-up no matter what, especially if these episodes are still continuing.

Even if the results of what they tested for are normal, what Serge is experiencing is not.

Poop Noodle! You didn't know what a dirty sanchez is? omg well I guess have no room to talk, I jut learned what it is about 4 months ago. :-)

I am wishing very hard that Serge is experiencing some strange episodic thing that will go away.

What Blobby said. A stitch in time saves nine.

I learned what a Dirty Sanchez was this summer while renovating the house. The Mexican crew couldn't stop laughing while the contractor was telling me. Ha! And, I thought my hair was thinning too but was asssured by my stylist that it wasn't. I have two brothers, one older, one younger, who have both lost most of their hair! After chemo, mine grew back darker, thicker, curlier and less gray! Not to mention what it did for my waist line, not that I'm reccommending that or anything! Ha!

I'm with the group that says a follow-up or second opinion can only be a good thing.

Indi gained a little weight too, but it's been coming off with our increased walks and decreased food. (Both of us.) I think they need to eat twice a day but maybe cutting back to the lowest portion the bag suggests or slowly transitioning to one of the lower calorie foods might slim him down a bit. Of course a freind to play with might help, too, I'm just sayin.

Have a lovely weekend.

Canada and the US are made up of immigrants. We are all immigrants I guess. It always confuses me when 'the immigrant situation' arises in both countries.
Good to hear Serge is feeling better. Positive vibes your way!
Talk about hair loss! No, I won't. Accept it...please don't try to hide it.!
Have a great weekend.
Jim

Oh yeah! The video was HILARIOUS!!!!

i totally agree with Blobby
donna

I'm very glad Serge is feeling better. You should call the doctor though...
Video is indeed hilarious...

I agree with everyone who said to call the doctor. Sometimes they just don't get back to you and you have to take a proactive approach to your health care. Call. Not knowing is worse.

I feed Taz once a day and I give him Purina Vet Formula Overweight Management. It has tons of fibre in it to make him feel fuller longer and it has maintained his weight (and made him stop eating poop.) Check with the vet for a good quality dog food.

I loved the video but can't believe there is no warning on it. Am I naive?! LOL!

Like the others suggest, if he isn't feeling well, then a call to the doctor is needed.

In terms of the film industry, it is a really a fine line between saying "There are people of Jewish descent who are heavily involved in the film industry" and "There is a Jewish conspiracy controlling the media." The first almost always leads some people to conclude the second (and it relies on assumptions that one's ethnic/religious identity results in homogeneous views across the board). In a similar sort of way, there is difference between "Lots of gay men are in the fashion industry" and "Because gay men control the fashion industry, and we know they hate women, fashion is made to make women miserable." People are cautious about generalizations because they do often lead people down bad roads. Well, that's what I think at least.

If you are trying to restrict food for beagles we were taught a really useful way of making sure our beagle only gets the amount of food she is supposed to.

it works a charm and the beagle has stayed the same weight since she was 1 year old and she is now almost 5.

They are such food hounds!