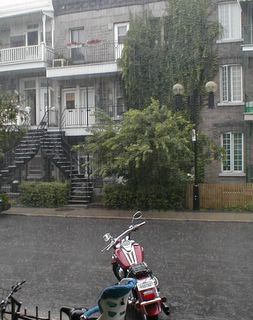 It's dumping outside now. It's 77 and pouring down tropical rain. I've been sitting outside watching the sky pulsate and imagining the clouds as giant sponges, some unseen force squeezing them and releasing. Squeeze and release. Rumbles of thunder roll in from a distance like a choir in the background. Serge sleeps uncovered on the bed, snores escaping now and then, oblivious to my morning ecstasy. Sara cowers under the desk - she hates choirs. The air is heavy and thick, like syrup. The sounds of water dripping from everywhere, incessant, is like a giant lullaby for a sleeping city. I feel like I got up early and caught Santa Claus on Christmas Eve.
Posted by tornwordo at 9:34 AM

*yawn*
you made me sleepy....it's been raining here all morning too....but your discription makes me want to crawl back into bed :)