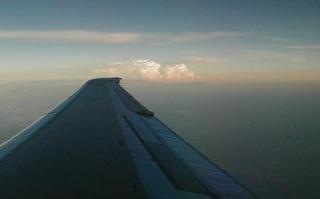 Airline travel isn't what it used to be. I'm sure this is nothing new to you. Having visited several airports over the last few weeks, it is quite clear that not only are airports hubs of paranoia, they are also studies in incompetence. I flew from LA to Montreal via Vancouver on the day following the London bombings and there was a huge police presence in the airports on this day, screaming at people unloading curbside and suspiciously eyeing people with baggage (yes, that would be everyone). Instead of feeling safe, it made me nervous, twitchy policemen ready to react.

Last weekend I took a short trip to visit my uncle. When I bought the tickets (from a site called lastminutedeals.com) I was informed that I would be under extra scrutiny for having bought my tickets "last minute". (How reassuring) The tickets were bought two weeks prior to the trip. Even though there are posted signs everywhere about the prohibition against lighters, I thought I would just see if I could avoid having to buy another one and left it in my bag. So I went through security in Montreal with no trouble, and then when I landed to make my connection in Chicago, I went outside to smoke and reentered the security screening - twice. Both times, there was no detection of the lighter in my bag. (I figured if they spotted it, I would play dumb and say I was unaware that it was in there.) Huge tubs of lighters that passengers voluntarily gave up sat in plain view at the checkpoints. Agents were reminding people about it and informing passengers that paper matches were acceptable, but not wooden matches. (Does this ring logical?) I saw people with diabetes explaining why they had sharp objects in their bags, and elderly people getting the bomb squad makeover. A kids' shoes caused a great deal of commotion and agents banged the shoes and wiped them with the bomb detection tissues. Apparently the shoes had little electronic lights that alarmed the agents.

I can see where this is going - soon all baggage will be prohibited and special paper airline gowns will be the only acceptable garb. Cavity checks will be common.

When I returned on Monday, I decided to ditch the lighter because it was on its last legs. Wouldn't you know it, then I was selected for extra screening, agents poring over my bag and shoes demanding to know what's this and what's that. The answers were fairly obvious, uh that's a tube of toothpaste (he must have been unfamiliar with "Crest") and that there is a packet of enchilada sauce (the powdered mix). The enchilada sauce caused the agent to ask for assistance as they opened it to inspect the contents. It came to mind to make a joke about anthrax laden powder but then I thought better of it.

To digress from the topic a bit, going home, I landed in Dallas for my connection and when I got off the plane, I remembered how Texans do everything big, and walking through the terminal, the lifestyle of excess was in clear evidence, this was the land of the behemoths. I've got nothing against people with a little extra meat on their bones, but when walking becomes difficult, it may be time to address your coke and french fry addiction. I actually giggled as I meandered around the airport, and thought about how our energy issues could be solved simply by tapping the liposuction clinics in Texas.

On the last flight to Montreal, we sat at the gate in the airplane for a half an hour as the crew discovered that a passenger's bag was on the plane, while the passenger was absent. We had to wait for the ground crew to go into the hold and find the missing passenger's bag before takeoff.
Passengers on the plane buzzed about how "safe" they felt with these new measures.

Your observations ring so true.

But hey, smuggling explosive powder in an enchilada packet?