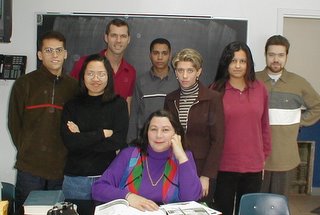 If you want a real intellectual challenge, try learning a second language. In case you haven't considered it, let me point out that it took you many years to become proficient in your first language. I don't know why I expected it to come more easily given this obvious fact.

Sitting in French immersion felt like wearing a dunce cap every day. For months, I understood little of what the teacher said. I tried to nod when I thought it was appropriate.

My teacher was Madame Mila. She was a large Russian woman who seemed eternally torn between severity and jolliness. She would never hide her frustration with students' errors and would stomp her foot and shout "STOP!" when you misspoke. (Stop is a French word by the way.) She had healthy testosterone levels as evidenced by her mannish stance and ersatz hairs speckling her face.

I loved this woman. Since I was nearly twice the age of the other students, I found her to be a fascinating caricature. I laughed helplessly when she yelled, "STOP!" while the other students quivered and sunk lower in their seats.

Having paid for this class with my own money, I couldn't be intimidated - something that so beautifully comes with age. I found her extrememly entertaining. Plus, she explained the grammar principles very well. (We still correspond to this day.)

Still, progress came slowly and in fact, it seemed the younger students were better suited to learning the language than I was.

I despised the cassette player and the listening exercises. I envisioned smashing it with a hammer every time she dragged it out. There were many days leaving school when I thought, "It's impossible. I'll never be able to get it." But I persevered. After all, there were NO REFUNDS.

Once I had completed level 6, I decided to continue private classes with Mila twice a week for the next few months. I was finally starting to get it. I could communicate my ideas and though I was nowhere near error free, I was starting to see that my goal was indeed attainable. There are many problems for an English speaker learning French. The gender assignment for every noun is probably the most difficult. It's also very important because adjectives change depending on what gender noun they are describing. (Did your eyes just glaze over?) Also, the verb conjugations are so perplexing that every native French speaker has a book next to their computer called the Bescherelle which is a book composed solely of verb conjugation grids. Yes, even the native speakers need to check their conjugations from time to time. By comparison, verb conjugation in English is simpler than George Bush.

There's one other hideous (some say "Beautiful", "Poetic" or "Musical") facet of spoken French. And that is that orally, they link all the words together so that you never know where one word ends and the next begins when you're listening. It takes a long time to hear the language enough to develop the ability to "deconstruct" it. I'm sure I muttered more than once, "Bastards and their fucking musicality."

During this scholastic experience from Oct 2000 to summer 2001, Serge worked from home though business was very slow. I grew more and more anxious waiting for my immigration process to conclude. In Jan 2001, I received the approval from the Québec government and in March I had to have a medical review. As I understood it, this was the last step except for the waiting. Soon I would be a legal resident. As the slow drain on the bank account continued, it was time to sell the house in California. The final cord to cut.

I'm reading your blog on a Sunday before 8am... your blog does get read.

I can't imagine the trouble with the words all running together.

I think I'm signing up for adult ed French this term. Could be fun and I won't be walking around Paris saying "la plume" like Lucy.

Okay phew enough french. Writing is much more difficult for me than speaking because I think conjugation errors are for more forgivable in conversation than in writing. You get the idea. Great post!

I feel like this post was written for me! I'm starting week six of my Spanish language courses and I am feeling like I want to quit! Thanks for the encouragement, I may stick it out a little longer thanks to you.....

Hehe, I think english was easy to learn, no wonder why. You don't realise how hard it is, until someone explain why it's so hard. I agree that french is very difficult (I think I actually make less typo in english than french and my english still terrible).

God you should see the final french exam to go to the university, you have to write like 6 pages with a maximum of 20 faults. It's "painful".

My problem with language is that I don't remember any word 5 minutes after reading it ;) I guess it's easier for some peoples !

Well, this was an education for me!
I never learned French, but I understood that since it was a latin-based language, it wasn't as hard to learn as other languages if your primary language was also latin-based.

I don't know why the teacher just couldn't speak slowly so you and the other students could've had an easier and faster time deconstructing the sentences.
Seems like you could've caught on faster. I mean, I know it wouldn't have sped up the learning in all respects, but every little bit would've helped.
I think they were just out to torture you.

Oooooh, I HATE the sound of French.
I'm starting to learn Spanish, thanks for letting me know what I'm in for!