I slept eight hours! And now the world seems infinite with possibility once again. I think this post is going to be all over the place due to my giddiness. Project poutine was fun wasn't it? And bonus points for the foreigner? The guy in the movie that wasn't spouse was the non-quebecer. Dickey rightly noted that it would be the one who held poutine with disdain. Did you notice he said, "It's not a good cheese"?

But that's just regular poutine. There are places that "specialize" in poutine and have come up with a lot of crazy concoctions. Most places also offer Italian poutine which is fries, cheese curds (right, the squeaky cheese is cheddar cheese curds, when you chew them, they squeak, ask someone from Wisconsin, they know about this cheese) and spaghetti sauce instead of brown sauce. I've never tried that one.

Neither one was acceptable.

I explained that I thought there was nothing wrong with either.

Then, Ha ha, I asked if anyone had done either one of those things. And, of course, everyone had. Laughter ensued.

Also this week in class, I was served this: 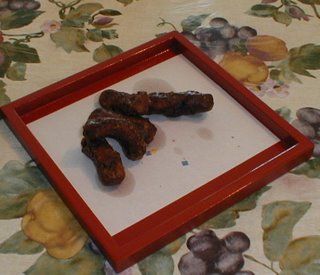 Okay, one last thing. I, tornwordo, have a new word for you. The word defines itself and therefore needs no definition, and an example of which is kind of like this sentence.

Congratulations on the sleep! I must admit that I was beginning to panic when it reached 8am and I still hadn't seen a new post from you.

Yea for no more insomnia!

I think everyone has done what you asked. No one will admit to it, though.

I like the plate thingie. I'm not sure about the food, though.

Congrats on the sleep! Nothing like a good one to make the world seem like a better place.

That Karinto looks like things I have been picking up in my yard for weeks! Appearance is sometimes everything!

Glad you finally got some sleep friend...

Or are we talking about the brief passing thoughts? You know, like "shoot, I meant to call her back!" or "I hope my mother doesn't call right now" ? Those thoughts are okay with me.

And we are talking about partners, right?

I can't really speak to that now, can I?

The Karinto looks, uh, interesting. I will take your word for it that it tastes yummy.

And we love you because you are geek!

I'm glad to hear about the sleep thing. Good on ya. As for the Karinto, I'm sorry, but good or not, I'd have a really hard time sticking something in my mouth that looks so much like it belongs in a kitty litter box.

No entry found for Superfluocititiousness.

No spelling suggestions were found.

No entry was found in the dictionary.

If dictionary.com doesn't have it - does it really exist? :-)

Wow, that looks like something I'd pick up off the street and show to my friends... "Hey guys, look what I almost stepped in!"

dang that is nasty looking. i'll take your word for it about the brown sugarness.

Superfluousness exists as the noun form of superfluous. I just like that if you add on many extra suffixes, it stands therefore as an example of it's meaning.

And I really have to use the word otiose now. I had totally forgotten about it. It deserves caresses.

since i just wrote a novel about poutine perhaps i'll leave you alone for tonight...

That could be an entry in the "Scat or Snack" competition

Hey, if you can't trust coffeedog's opinion about what's on the plate, who can you trust?

I think that's really doggy-doo, they dipped it in a brown sugar concoction and gave it to you as a joke.

I'm allowed to comment more than once on a posting, aren't I?

Ooh, t wins the award for most obnoxious post. Nice one. Did you gag just a tiny bit thinking about it?

Also there is the kitty litter cake that you bake up then put in a (clean) kitty litter pan and serve with a poop scoop. Eduardo had a difficult time eating it. I think he never could make himself do it actually. It is pretty visually convincing.

Did you really just send me to a site called ratemypoo.com? That ain't right.

And I'm new here, so I don't know what "class" this is you speak of, but here in America we don't have Poo on a Platter classes. Those classes are unpatriotic, you know.