I've been having smoking dreams. The worst is the dream where I'm smoking a cigarette, and then I "remember" that I have quit and then I experience a huge crushing guilt about it and wake up. Then last night I dreamt Spouse was smoking in the house and when I tried to move the ashtray with burning cig in it outside, he protested and said he had the "right" to smoke in the house, and then I woke up. Going to step 2 on the patch tomorrow, perhaps I'm having some anticipatory anxiety about it. Plus, night before last, as a special bonus, I woke up in the morning with clothes on in bed. I had gone to bed naked, and woke up like that. You know what that means. Sleepwalking again. Sigh.

Life is so busy right now which is reflected in the blog by listlike posts. I enjoy it, but thrice in one week seems a bit much, as Spouse so kindly pointed out. I've got four more weeks of these crazy work committments before it eases up.

I took a little video of the Tire, the maple syrup lollipop thing described on Tuesday. This is traditionally done outdoors. We were inside, however, because it was pouring rain outside that day.

Em has got me thinking (again) about the heinous acts of the administration in power. Seems that internet communications have been secretly surveilled for several years with the help of AT&T. Emails, chat, sites visited and the like. And I think Em hit it on the head when she said we could all look bad under the proper lens. Go check her latest posts and see if it doesn't make your blood boil.

Finally a pic of my bébé, atop the lookout point on Mont Royal last Sunday. It looks like today is going to be equally fabulous. 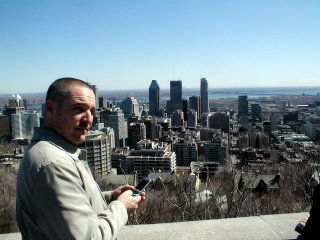 Posted by tornwordo at 7:22 AM

Does he ever complain about how many pictures you take of him? V does. He's like, "You and that camera!"

And he was the one who took me to get it in the first place. I just think he's so cute, I have to snap-snap-snap!

I hope today is as equally lovely as last Sunday was!

I loved the view from Mont Royal. Do they still have that big ass electric cross up there?

I love that cross. I sleepwalk whenever I'm really stressed-out, and it can be an alarming experience to say the least. Just keep plugging your mouth full of taffy with Serge and Stephan, and you'll be okay.

Okay. For what it's worth, I believe you are going to be successful in quitting. You are doing a great job of ripping your covers, and you know that one cigarette will finish you.

Thanks for the link. I'm gonna go find what you wrote in my yearbook now and post it to the comments. I guess that is why people save those things...

The smoking thing, it'll get better, hang in there.

Have a great weekend.

hang in there...you'll get through it!

your honey's too cute.
and is that a razr he's holding?
i love mine.