Regal Sara and a joke 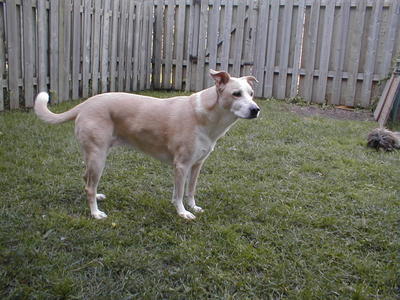 Caught this shot yesterday when I was playing with the dogs in the backyard. Somehow I got this beautiful picture of Sara, paying attention to some noise she had heard.

Don't really have a topic in mind to write about. It seems I've done a lot of spouting off this week, and so I thought I'd give everyone a break.

How about a joke. You may have heard it but it still makes me laugh.

A guy is driving down the freeway in the car with his girlfriend. They are having a big argument about infidelity. Behind them, a man and his 10 year old daughter are driving home from her school. They pay no special attention to the car in front of them.

The argument in the car ahead becomes more intense, and finally, in a Lorena Bobbit moment, the girlfriend reaches over and pulls out her boyfriend's penis, slices it off with a pocket knife and then hurls it out the window.

The man and his caughter in the car behind this scene are discussing stopping for ice cream when the other man's member makes a big "splat" on the windshield of the car. The father quickly puts on his windshield wipers and washes the thing off. The daughter, agape, says, "Daddy, what was that?" He replies, "Oh nothing honey, just a bug, you know there's a lot of bugs this time of year." The daughter pauses for a moment and says, "The bug sure had a big dick, didn't it?"

And that's the joke. Heard it before? Think it's funny? Perhaps not, but I do.

Enjoy the day!
Posted by tornwordo at 7:01 AM

I haven't heard that joke before and I gotta admit, it's a good one!
Don't worry about the days when you don't have a particular topic to write about. Once in a while it's refreshing to read a blog that's simple and is going in no particular direction. Of course, I can't speak for anyone else.
On some days, complex blogs make my brain ache.

LMAO You're weird. (that was said in my best Johnny Depp voice...)

LOVE the joke. I'm going to retell it at least three times today, I'm sure. Thank you kindly :-)

Have a great weekend!

two biscuits are sitting in an oven. the first biscuit says, "jesus, it's hot in here!" the other turns to the first and shouts, "holy shit...a talking biscuit!"

Didn't liked the joke ! Only la.sequencia one =P

Beautiful dog...what kind of breed is she?

She's a lab mixed with something. Got her from a shelter when she was 8 months old in California.

Well she's a beaut.. Actually has the thickness in body like a pitbull or boxer.